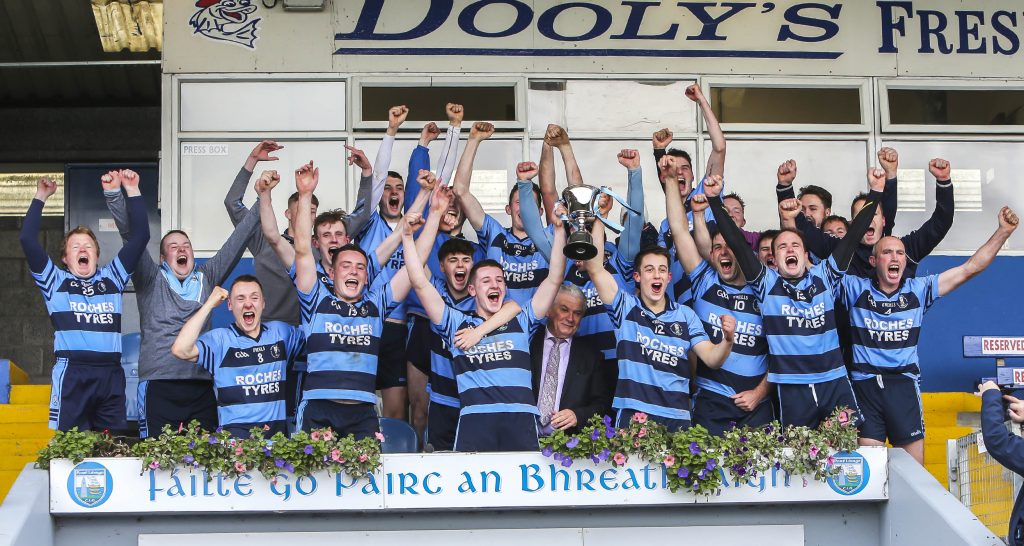 Ballysaggart players celebrate with the cup, presented by County Board Chairman Paddy Joe Ryan. Next up are Causeway in Dungarvan on Sunday. Photo: Maurice Hennebry.

Six years on from when they became the first Waterford team to win a Munster Junior Hurling Championship title, Ballysaggart return to the provincial stage on Sunday next in Fraher Field where they will face Kerry Senior champions Causeway on what they hope will be the first step towards emulating near neighbours Cappoquin and Lismore’s feats in bringing a Munster Intermediate title to the Deise.
Ballysaggart had hoped Munster Council would accede to their request to have this game played in nearby Ballyduff Upper where the pitch is totally enclosed but the request was turned down and the game proceeds in Fraher Field with a 1.30 p.m. throw in.
Facing Ballysaggart on Sunday will be Kerry Senior champions Causeway. With the introduction of the Munster Intermediate Club Championships in the noughties it was agreed that the Kerry Senior champions would be allowed compete in the lower grade. Since then only two Kerry teams, Ballyduff in 2011 and Kilmoyley in 2016 have contested finals each losing out to Effin (Limerick) and Lismore respectively. Too much should not be read into that statistic however as the Kerry clubs have competed well mainly going out to the eventual winners in the early stages.

STRONG HURLING TRADITIONS
The senior hurling championship is very competitive in northern area of The Kingdom where almost all of the games are of the ‘Local Derby’ variety attracting highly partisan crowds with this year’s final between Causeway and defending champions Lixnaw bringing in over two and a half thousand. With Causeway winning their first title since 1998 there were wild scenes of celebration at the final whistle.
Though having won just eight Kerry titles, compared to the 25 and 24 won by Ballyduff and Kilmoyley respectively, Causeway is a club with a very strong hurling tradition and this year’s victory brought the club its first title since 1998. The club’s most successful period was between 1979 and 1982 with the winning of four county titles in a row. In 1981 they faced Mount Sion in Causeway and lost on a score of 2-10 to 2-5 with the Waterford champions just pulling away in the final minutes and going on to win the Munster Club title.
The secondary school in Causeway has been the foremost hurling nursery in Kerry and down the years has won a number of B and C colleges titles against opponents from strong Munster counties. Despite not making it to the Joe McDonagh Cup final Kerry were very competitive in the league this year, consigning Offaly to Division 3. Causeway had three regulars on the Kerry team this year in Bryan Murphy, U-20 colleges star Dan Goggin and forward Colm Hearty who was named ‘man of the match’ in the county final having scored both his side’s goals.
Since winning the county and Munster Junior titles in 2016 Ballysaggart have been building towards bringing the club into the senior championship. Each year they came up just short in the Western championship. This time around it all came together for them. They go into Munster well tested having come through by a single point against An Rinn and going on to beat former All Ireland Junior champions Ardmore in the Western final. Ballygunner’s second string had swept all before them I the East but Ballysaggart’s hunger on the day saw them through to the county title.

USED TO MUNSTER GLORY
They will have nine of the side that took them to the 2013 Munster title in their starting fifteen on Sunday. On that occasion the Bennetts, Stephen and Shane were minors having won their All Ireland medals that same year while Kieran was just out of minor ranks. Their contribution then could not be understated. Now, six years on, all are seasoned county seniors, at their peak and backed up by an experienced squad. Few, if any, teams in this grade will have such players capable of being match winners on any given day. While Causeway will, no doubt be aware of the threat posed by the brothers and will be taking steps to counter them, the Kerry side would be foolish to underestimate the overall strength of this Ballysaggart side. In goalkeeper Michael Ryan they have one of the outstanding net minders in the county and players like Kieran Fennessy, Christy Murphy, Darren Meagher, Caileann O’Gorman and Ronan Walsh would be assets to most senior teams in Waterford.
The Kerry county final was at the end of August. Causeway celebrated their victory in style throughout the following week but the word coming through is that they see this game as an opportunity to succeed where none of their local rivals have before and they have been making full use of the long break to prepare for this game.
While Ballysaggart will have celebrated their county final victory, with experienced people such as Frank Flannery in the background I have no doubt they will have been quickly brought down to earth. The Waterford champions go into this game as strong favourites but I believe it could be a much closer game than may think with home advantage giving Ballysaggart the edge in the closing stages.