Fine Gael has assembled its general election team with Paudie Coffey, John Cummins and Damien Geoghegan on the ticket.

Is this the first time since the Deasy-Collins-Bulbulia ticket (33 per cent gender quota) of the (second) November 1982 election that they will run three in the hope of capturing two seats?

It’s a brave strategy, albeit based on flimsy foundations. The vote management strategy will be extremely interesting to see on the ground.

Two out of three worked well in 1982, but hospital issues blew it asunder in the 1987 election while a two-seat return from their Deasy-Coffey-Darcy 2007 ticket never looked likely, as subsequently proved the case.

The past eight years of Fine Gael government have been difficult in Waterford. Regular hospital protests have heightened political awareness and ventilated a wider dissatisfaction with FG in government.

Waterford remains wholly unsure if it matters to Government any more with delivery on investment promises by politicians from the Taoiseach down is still awaited. The feeling of a deliberate reduction in the status of the city, driven by Fine Gael politics, is widespread.

That has been driven by the loss of VEC offices, diminution of the IDA presence, the amalgamation of county and city for financial reasons which has rebounded on the city’s ability to fund its own development, realignment with and loss of acute hospital budget to Cork, appalling mismanagement of the 24/7 cardiology and other issues at UHW and failure to deliver university status.

The two per cent funding reduction at WIT and failure to develop any new academic buildings at the Cork Road campus since 2005 (separate to developments at Carriganore) deserves further treatment.

An exhaustive list should also contain the North Quays, the airport, port funding and a failure to meet the employment targets established in the Action Plan for Jobs.

Yes we have a new Court House, Fire Station, the 100-bed unit at St Patrick’s, Primary Health Care centre at St Otteran’s but similar investments have been delivered to smaller towns all across the country as part of PPP bundles. The new UHW  Dunmore wing and its associated palliative care unit stand out as headline investments but still await staffing and resource funding.

Hope springs eternal, and maybe FG believes its own spin, but one thing is certain, if there is no physical move on UHW issues before the election, then Fine Gael will be crucified. Meanwhile, Cllr Marc O Cathasaigh will run for the Green Party and Eddie Mulligan for Fianna Fáil. Both will rattle a few cages.

Traveller housing up for debate

It was no surprise that members of Waterford City & County Council refused to allow an expansion of the Traveller housing site at Carrickphierish.

Every Councillor on the Metro Council has been overwhelmed with complaints about what has been allowed to happen there.

Difficulties with various forms of anti-social behaviour in  the area, from parking of caravans on the footpath to scrapping cars on the public roadway, burning noxious material and leaving horses loose around the area has brought the issue to a head.

There are three beautifully built housing units and a small hard stand on the site at present and the proposal is to extend it by adding a further seven bays, making it into one of the largest such sites in the region.

Councillors believe, with some justification, that if they allow the expansion that the families involved will be back in a year or two demanding more units. It is in no one’s interest to create such a large compound in a rapidly developing new suburb where many young couples in the settled community have been put to the pin of their collar to finding a mortgage and buying a new house.

Members of the Travelling Community have to be housed, and treated fairly, but people also have to obey rules. More importantly, the council has to apply the rules. A retired member of Waterford City council told me he opposed the initial creation of sites in Williamstown and Carrickphierish on the basis that the Council had not tackled difficulties with members of the Travelling Community in Ballybeg.

If you drive out past the new Fire Station to the Six Cross Roads Business Park you will pass an area which has been utterly colonised by sheds and structures of all kinds with horses wandering everywhere. You can see for yourself that the problems which were visible 20 years ago have multiplied and not been tackled. There are also problems regarding those claiming rights on the lands behind the Yellow House on the old Hartery farm at Ballybeg, on the Halley farm at Lacken and elsewhere. The Council knows about these problems for a very long time but the difficult issues have not been tackled. Now the situation has worsened in Carrickphierish and Williamstown. Unofficial additions to official sites have been built and occupied with new mobile homes without planning permission.

It’s easy to give in when you don’t live in the area affected, but all that does is store up problems for the future as the experience with Ballybeg has shown.

Of course these are difficult issues but the Council must be seen to act in an even handed manner for settled and Travelling Communities.

The future of retailing

It is not clear if the North Quays planning application will be submitted this month. Waterford city has a deficit in comparison retail, which we desperately need to remedy. We are losing millions to Kildare Village, Mahon Point and Dundrum every year in disposable spending but there is huge nervousness locally that a massive retail expansion on the North Quays may be counter-productive in the historic city centre.

Many have legitimately asked the question as to why the Michael Street shopping centre cannot be developed while confining the North Quays to office, apartment, hotel and transport links?

Writing in The Guardian newspaper, Sarah Butler recently noted: “Retailers have axed 85,000 jobs in the past year as weak consumer demand, rising costs and the switch to online shopping, exacerbated by Brexit uncertainty, have put businesses under increasing pressure. Job losses in the UK’s biggest private employment sector – with particular importance for women – are the latest sign of a crisis on the high street that has seen the closure of thousands of shops and the collapse of some well-known retail names. Bonmarché, the UK fashion chain for over-50s, went into administration last week, putting nearly 3,000 jobs at risk, just weeks after hundreds of jobs were lost at Karen Millen and Coast, which closed all their stores after falling into administration. Reports of the death of the high street were ‘greatly exaggerated’ as shoppers still enjoyed browsing and the social side of shopping when stores are sufficiently attractive. “

For Waterford, a hotel in Michael Street and another on the Waterside or thereabouts would be the best things we could do, coupled with some gastro/restaurants in John Robert’s Square, Broad Street area with outdoor seating and a willingness to stay open after 6pm.

The current mad gallop to close up shop after 4.30, with some even doing so at weekends institutionalises negative perceptions. In a chicken and egg situation, someone has to do something different or else!

On Friday, October 18, the Minister for Education and Skills Joe McHugh and Minister of State for Higher Education, Mary Mitchell O’Connor announced funding of €14 million to higher education institutions.

The fund was allocated under the Higher Education Authority 2019 call for submissions for higher education restructuring, consolidation and collaborative projects. A sum of €2m went to the WIT/IT Carlow-proposed TUSE merger and €1m went to amalgamating IT Carlow with St Patrick’s College Carlow, an old seminary with about 300 part-time students.

It looks increasingly like the Department of Education will throw money at anything to big up Carlow IT in its competition for primacy with WIT.

The reality is that WIT admits nearly 2000 undergraduates per annum and Carlow admits about 1100. This is a huge difference in scale. WIT is back in growth mode again following a lean decade imposed on it by a deeply antipathetic Higher Education Authority and forces within the Department of Education completely inimical to Waterford.

The willingness of Dublin bureaucracy to do everything in its power to maintain the brain drain of students from the South East to Dublin (and Cork) universities is an enduring disgrace which has resulted in massive financial transfer (student fees, accommodation, maintenance, earnings lost) from this region to an already overblown Dublin.

The breakdown is provided in a new study by the HEA which shows that socio-economic background is also an indicator of likely salary levels after graduation, suggesting postcode and social capital are a big influence in that first job. Nothing to see here folks, say the students from Blackrock and Mary’s etc. It was ever thus.

Of even more general interest, although not part of this report, is that students from Dublin, Cork, Limerick and Galway, who attend university, do so in their home towns.

The balderdash consumed across the South East that kids must travel for university education is almost an act of faith beaten into people’s heads to have them accept the status quo. A university in Waterford would begin to change that dynamic and transform the city and the South East. 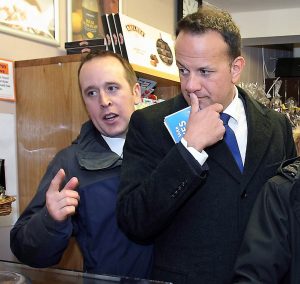