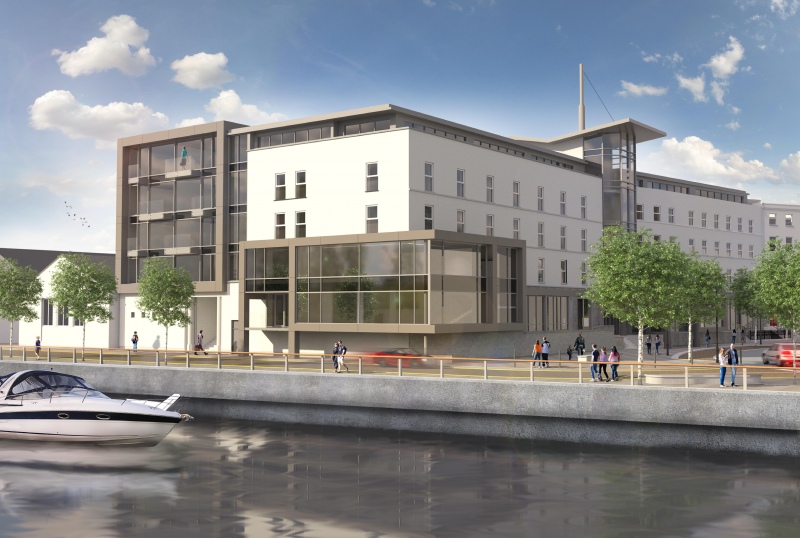 THE sole objector to the redevelopment of the Tower Hotel has submitted five separate issues about the plan, which will see the demolition of a number of protected structures around Lombard Street, making way for additional hotel rooms, a conference centre and supporting facilities.

Former President of Waterford Chamber of Commerce Monica Leech, objecting through Michael Reilly Consulting Forensic & Litigation Engineer, states in her submission that even though she is “not anti-development” and has “never before objected to a planning application”, she “objected in the strongest possible terms” to the development, which is due for decision by An Bord Pleanala on or before December 10.

Ms Leech, along with her late husband John Leech, were once leasehold owners of 16 Lombard Street, 23 Rose Lane and a property at 3 Marble Lane.

No 23 Rose Lane and the large advertising billboard on Lombard Street, occupy an area that is planned as an entrance to the proposed Tower Conference Centre.

The first of Ms Leech’s five objections to the development relate to three pieces of property (and a billboard) in their ownership, which have been included in the development.

The second point relates to a perceived “inaccuracy” in Neville’s planning application, which Ms Leech states, has “one protected structure” listed, when “there are actually four protected structures” proposed for demolition. Based on this assertion, Ms Leech stated that the Public Notices were “inaccurate and misleading” and that the application “must be deemed invalid”.

The third point, which is directly related to the second, sees Ms Leech saying that the removal of “five structurally sound buildings of historical significance that date from the early 1700s, and the willingness of the Local Authority to countenance such wanton destruction simply beggars belief”.

Ms Leech said that “this is the same Local Authority that prosecutes poor people who replace rotten timber windows in listed homes with modern equivalents in an effort to keep their children warm”, and the “same Local Authority that require young couples building on sites with old cottages on them to retain rotten walls constructed from field stones with no DPC’s as part of their home, all in the name of conservation.”

Ms Leech accuses Waterford City & County Council of conservation “double standards” after they originally approved Neville’s submission “without any effort from the conservation section of the local authority to retain any of the features from the existing historical structures”.

The fourth point relates to 36 The Mall, which will be demolished as part of the development, but which Ms Leech believes to be “historically important”.

The building features granite steps and an intricate cast iron railings to the front, which is the last survivor of a group of seven Merrion Square scale houses, six of which were demolished from the early 60s to the early 70s, to accommodate the current Tower Hotel building, which Ms Leech described as being “architecturally mediocre”.

In the final point, Ms Leech calls the design of the proposed redevelopment “lacklustre”, despite not wishing to be “unduly critical”.

It’s “unimaginative, humdrum, repetitive and architecturally extremely mediocre,” Ms Leech said. Commenting on the recent additions to the roof and the side of the existing hotel, she added that these were of “very poor architectural merit”, with the use of “cheap materials” and the “unfinished end result as visible from the Mall” was “quite literally tedious and appalling.”

Two more Waterford people have been confirmed with Covid-19