The Book Nook: Leonard and Hungry Paul by Rónán Hession 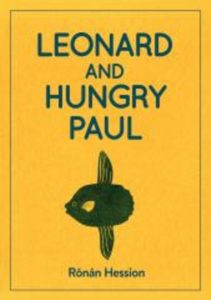 LEONARD and Hungry Paul is the story of two friends who gently and unobtrusively try to find their place in the world. Both in their 30s and both living at home with their families encourages society to view them as uninteresting, a burden, even unambitious. Yet maybe, just maybe it is possible to live at home, go on holidays with family and settle into the adult phase of your life still living with the family you were born into, never quite letting go of that comfort blanket and forming a new appreciation for a relationship with your parents as an adult.

Hungry Paul has a sister who is getting married, he has two parents who are young at heart and still sexual in their flirtatious banter, and over the course of the novel, he begins to feel a question mark over the space he occupies in the world if everyone is moving on their own path. To the world, he is perhaps to be pitied, he has light hours as a relief worker on Mondays as a postman, he takes beginners Judo classes, initially wearing his dressing gown to get into the mindset and he enjoys routine and structure. Yet inside, he is calm, he is mindful and his gentle manner allows societal issues to wash over him, remaining unphased and almost serene.

Hungry Paul can’t be left home alone as such, his sister realises that she will need to one day care for him, his parents worry about his lack of apparent independence and this man in his 30s is treated as less than capable. Why? Is it because he lives at home? And if so, what does that say about how we view others in society and the choices which they make.

Leonard also lives at home, both of his parents now gone, his mother only recently so. Through his job as a children’s encyclopaedia content writer, with a particular love for the Roman period of history, Leonard met Shelley and he underwent a period of transformation swapping his Paisley pyjama tops for more conventional fashion choices. Is this period of transformation brought on by the independence which Leonard needed to embrace or would he have found love if his mother was still alive and they were living in the same house? Rónán Hession perhaps unconsciously raises this issue on the limitations which we allow others to put on us, or more correctly, the limitations which we put on ourselves by making excuses as to why things haven’t worked out for us.

Irish society, from the postal service down to the sewing kit stored in the Roses tin at home, is vividly portrayed, with glimpses of humour and lightness lifting what may otherwise have been a heavy read. The characters are not exciting but they are superbly written. Equally the plot is not exciting but it is written in an extraordinary fashion, with a superior command of language and a rare insight into the strength of the appeal of an ordinary day, in an ordinary life.

This is one of my favourite books, not just this year but perhaps ever and the fact that it has been written by an Irish writer is a delicious cherry on top. Rónán Hession viewed society with all its prejudices, then he viewed people, really viewed people and he gave us Leonard and Hungry Paul – two men with a pure, gentle friendship who are vulnerable and geeky and very unaware of the stunning ripple that each has made in the lives of others.

Parking charges resume in Tramore, but not Waterford City