A good weekend for Waterford teams in the SFAI Cup 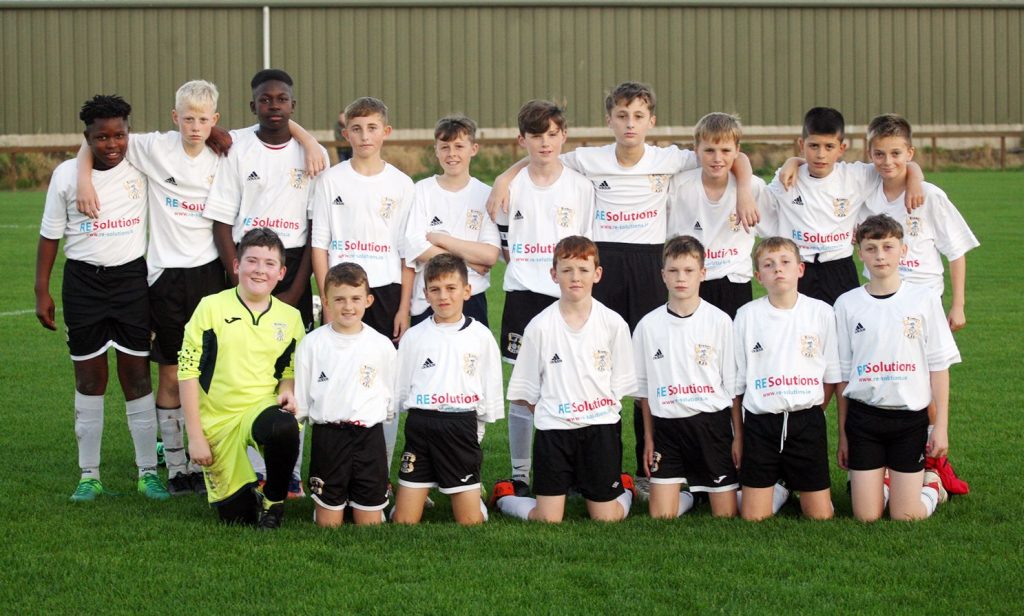 The Tramore team that got the better of Bohs in the Skechers SFAI Under 13 Cup at Graun Park on Saturday. Photo: Paul Elliott.

Zak O’Sullivan scored an important brace that helped Tramore secure their place into the fourth-round of the Skechers SFAI Under 13 Cup when Damien O’Brien’s side got the better of Bohemians in their meeting at Graun Park on Saturday afternoon last.
Tramore got their noses in front with 17 minutes on the clock when they were awarded a free-kick from referee Pat Fitzgerald just outside the penalty area and it was Joe Brennan that powered an unstoppable effort past a helpless Bohemians keeper Igor Bacela.
After Alex Sheehan and Zak O’Sullivan had efforts saved by the brilliance of keeper Bacela, it was the home side that gave themselves a cushion of a second goal on 52 minutes when Sheehan played O’Sullivan clear. He skipped past two Bohemians defenders before rifling a shot to the roof of the net.
Adam Berisha went close to pulling a goal back for the Ben Wadding Park outfit soon afterwards when the attacker struck the crossbar with a stunning effort before Zak O’Sullivan ensured his sides success when netting his second, his sides third, late on when finishing a brilliant pass from Shay Corcoran.
Ballinroad are through to the fourth-round of the Skechers SFAI Under 13 National Cup after a brilliant penalty shootout win over Wexford Albion after a thrilling 2-2 draw after extra-time in a game played at St. Laurence’s Park on Saturday afternoon.
It was goalkeeper Diuran Norris that proved to be the hero in the shootout as the youngster saved a crucial second Wexford Albion penalty that gave his side the upper hand to record a 5-4 success after a nailbiting shootout.
Charlie Feeney and Paudie Nee were the two players that grabbed the goals in the normal time for Ballinroad and after the extra 20 minutes failed to produce a winning goal, the dreaded penalties were called into play to decide the outcome.
Cian McGrath, John Dillon, Charlie Feeney, Conor Byrne and Oisin Power were the men that assumed responsibility for the Western outfit, and they were successful with Power netting the winner that will see them travel away to Clerihan, St. Annes or Gorey Rangers in the next round.

Also in th U-13 SFAI Cup, Southend United defeated Freebooters 2-1 at home with the goals coming from Charlie Barden and Paul Kiely.

SFAI UNDER 15 CUP
Conor McCabe scored an impressive hat-trick as Villa secured their place into the next round of the Skechers SFAI Under 15 National Cup after a 5-0 trouncing of Tipperary side Cashel Town in their clash played at Connor’s Park on Saturday afternoon last.
After Harry Sharpe gave Tosh Cleary’s side the lead, it was McCabe that took over with a treble of goals that put in his driving seat and with Baasit Ishola also on the scoresheet for the home side, they can now look forward to facing with Wexford Albion or Hanover Harps away from home in the next round.
Dungarvan United will be on the road in the fourth-round of the SFAI Under 15 Cup after the Old Borough outfit held their nerve to overcome the challenge of Laois side Crettyard United in their tie at Kilrush Park on Saturday.
Goals from Sonny O’Donnell and Kyle Moloney ensured that the game finished 2-2 after normal and extra-time, but there’s no doubting that the hero for the victors was goalkeeper Diarmuid O’Mahony, who showed his class between the sticks to save three times in the shootout.
With O’Mahony producing the goods between the posts, it was his teammates David Butler, Kyle Moloney and Seanie Flavin that kept their composure in the shootout to see their side run out 3-2 winners with an away tie against St. Joseph’s or Gorey Rangers awaiting in the next round.
Tramore have progressed with ease to the fourth-round of the competition after they proved too strong for Bridge United in their meeting at Graun Park on Saturday afternoon last as the home side hit eight goals in a rampant 8-1 success to set up an away tie against either Clonmel Celtic or Clonmel Town.
Due to the inclement weather and the fact that there was already an Under 13 game on the Southend United pitch, it meant that the Under 15 clash between the tangerines and Evergreen was called off and they’ll now have to travel away from home when the game is re-fixed over the coming weeks.