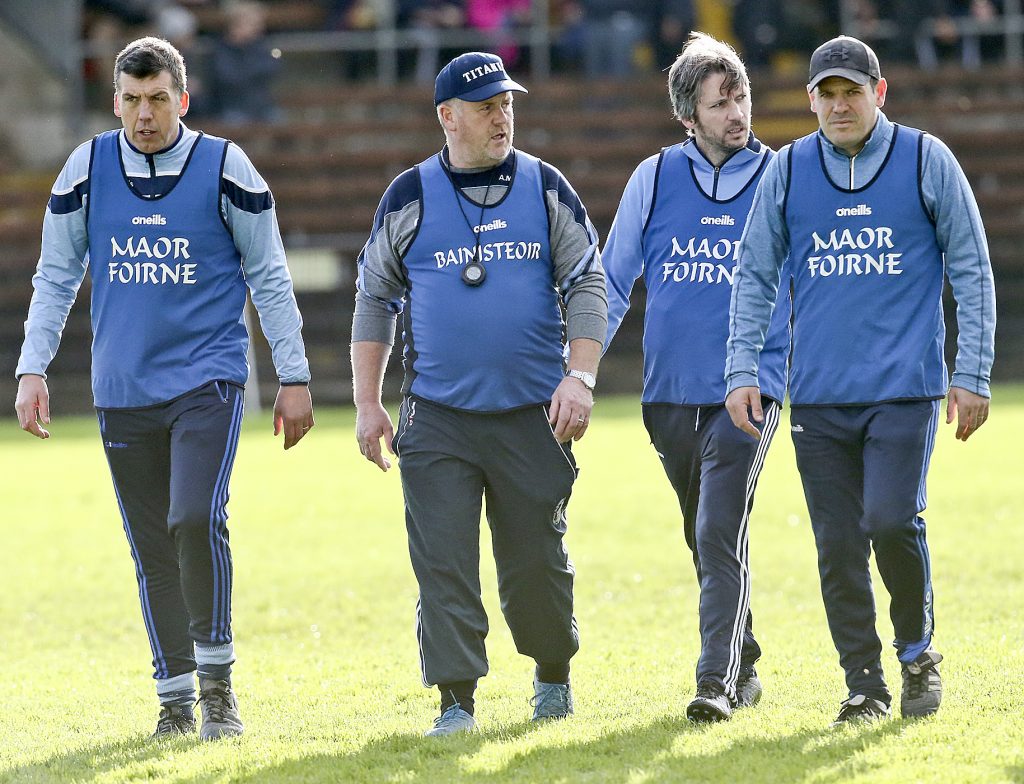 Ballysaggart’s Aidan Meagher and selectors will be hoping that Stephen Bennett’s injury isn’t too serious ahead of Sunday’s meeting with Sean Treacys. Photo: Sean Byrne.

Following their bruising quarter-final clash with Causeway on Sunday last recovery is the name of the game for Ballysaggart as they prepare for next Sunday’s semi-final in Fraher Field where they will face newly crowned Tipperary champions Sean Treacys from Tipperary. The Tipperary Town side will be in something of the same boat as Ballysaggart are concerned as they qualified for this semi-final on the back of their victory over Kildangan in their county final clash last Saturday.

SHANE BENNETT DOUBT
The biggest worry for Ballysaggart going into this game must be the leg injury to Shane Bennett that saw him being assisted all the way to the dressing room after the fulltime whistle. Should he be unable to play his loss would be huge and heap the pressure on his siblings, Stephen and Kieran, and indeed the entire team, to step up to the plate.
Not too much would be known about the Tipperary champions Sean Treacys. The performances of Tipperary teams in this championship in recent times has not been too impressive with the second string sides of senior teams challenging strongly for the title on the domestic front thus letting teams other than the champions go forward into Munster as happened last year when Thurles Sarsfields’ second string won the Intermediate title.

STEPHEN AND RYAN ON FIRE
The big plus for Ballysaggart going into this game is the form of Stephen Bennett who on a given day and against any opposition can be a match winner by his own right. Not far behind him in that role is goalkeeper Michael Ryan who most certainly has established himself as being up there with Stephen O’Keeffe and Billy Nolan as a shot stopper.
All the year Ballysaggart would seem to have improved with every game as the championship progressed, peaking at the right time in the Western final against Ardmore and the county final against a fancied Ballygunner second string. Everything since then has been a bonus and fielding most of the side that reached the All Ireland Junior final in 2013 they can draw on the experience of that journey as they take every game in Munster as it presents itself.
Causeway were no bad team and they asked serious questions of Ballysaggart on Sunday last forcing the Waterford champions to dig deep. They did just that and I have no doubt but that Sean Treacys will get a similar response on Sunday.

ANOTHER BIG GAME IN PROSPECT
For Ballysaggart to follow up their Munster Junior win of 2013 with an Intermediate title this year would be a huge achievement and a clear sign of progress by this small club. It is not beyond the bounds of possibility considering that hot favourites Fr. O’Neills of Cork were hard pressed to beat Limerick side in extra time last Sunday. First however, they must come through on Sunday and that could all depend on the availability or otherwise of the injured Shane Bennett.
Whatever way things enfold Ballysaggart have made the county proud and will continue to do so.