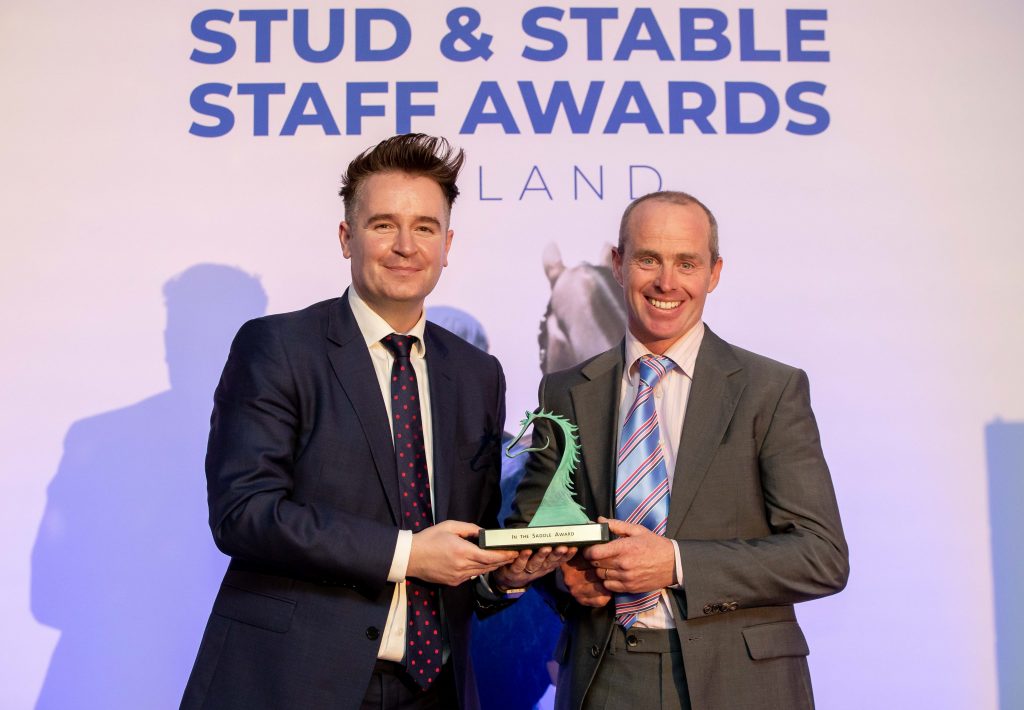 Winner of the In The Saddle Award at the 2019 Godolphin Stud and Stable Staff Awards – David Roche, Head Lad, Henry de Bromhead – presented with his award by Special Guest Jarlath Regan.

Davy Roche, head man at Henry De Bromhead’s yard at Knockeen, took the In The Saddle Award at the recent Irish Stable Staff and Stud awards. Davy also an amateur jockey has been with the stable for over 10 years and has played a significant role in the many big race successes in that time. Grade 1 winners Sizing Europe, Special Tiara and Minella Indo were all under the Tramore mans care and his application remarked on the inspiration that he brings to all of those working around him in one of the country’s top yards.

Did You Know
Gordon Elliott has 200 horses in his care and a staff of 50.
Recently crowned British champion apprentice jockey Cieren Fallon did not sit on a horse until he was 17.
Having captured the Ascot Champion stakes with Magical the only UK Group 1 races that Aidan O Brien has still to win are the Kings Stand Stakes and the Haydock Sprint Cup.
Silvestre de Sousa is spending the winter riding in Hong Kong.
When Star Catcher scored on Champions day at Ascot he provided Frankie Dettori with his 250th Group 1 victory.
Dan Skelton trains 130 horses with a staff of 45.
Waldgeist who lowered Enable’s colours in the French Arc is retired to stud.
Gary Moore has a string of 100 horses with a staff of 32.
Group 1 winning mare Mabs Cross will be offered for sale at the Tattersalls December Mare sales.
Former amateur jockey Robbie McNamara is now a licensed jockey agent and has Bryan Cooper and Mikey Fogarty on his books.
Jockey agent Kevin O’Ryan looks after the riding arrangements for promising young flat jockeys Oisin Orr and Andrew Slattery who tied with 43 winners each in the leading apprentice title.
Current Irish apprentice riders Ben Coen, Gavin Ryan and Andrew Slattery were all in the same class at school.
Andrew Slattery (18) was 14 before he sat on a horse.
The vast majority of French bred horses in the Willie Mullins yard are sourced by Pierre Boulard while Harold Kirk sources horse from the UK and Ireland.
Harry Fry has 75 horses in his yard with a staff of 25.
Leanne Breen who enjoyed her first track success when Latchet scored at Dundalk has 8 horses in training.
After Scream scored at Dundalk winning trainer Ger Lyons said that if a horses mark drops below 70 he doesn’t want that horse in his stable.

Magical Retired
The Aidan O’Brien trained Magical (4).has been retired. She won 9 of her 21 races earning prize money of £3.3 million. She will be mated with No Nay Never next year.

Claim Gone
Darragh O’Keeffe lost his right to claim after steering The Gatechecker to victory in the Cork National.

Wayne Retires
After riding over 800 winners jump jockey Wayne Hutchinson (39) has called time on his career in the saddle.

A Quiet Winter
Promising apprentice rider Andrew Slattery will not be seen in action much at Dundalk this winner as he is keen to protect his claim for next year’s turf season.

Ben’s Plans
Cork born UK based flat pilot Ben Curtis (30) has 100 winners to his name this year and intends splitting the winter between Britain and the Middle East.

Mark’s Record
Trainer Mark Johnston set a record for the most winners on the flat in Britain in a calendar year when Bavardages was his 236th winner of the year at Kempton.

Line Of Duty No More
Trainer Charlie Appleby lost Line Of Duty to a fatal injury last week. The horse won three of his 10 races with prize money earned of £630,000.

Ryan Returns
After five years out of the saddle Ryan Mania (30) returned to the fold last week.

Settling In
Irish born UK based trainer Fergal O’Brien recently moved to a new yard in Gloucestershire and is now a neighbour of fellow handler Kim Bailey. Fergal settled in quickly and enjoyed a treble at Cheltenham on the opening day of the Showcase fixture.

Tony Returns
Tony Kelly who rode 87 winners in the UK when attached to the Rebecca Menzies yard has returned home to the West of Ireland after injury cut short his career. Tony a son of trainer Pat ”Presenting Percy’ Kelly sent out his first point winner at Loughrea.