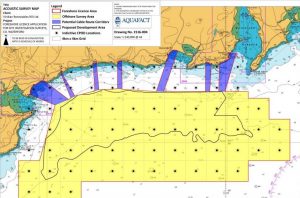 An Acoustic Survey Map commissioned for site investigation surveys in relation to the potential development of an offshore windfarm off the Waterford coast.

ENERGIA Renewables ROI Ltd has responded to public concerns regarding the prospect of their developing a large windfarm off Helvick Head on the Waterford coast.

Application for a foreshore licence was publicly announced on July 9 with August 6 last set as the closing date for public submissions in relation to the proposal.

In September, a consultation with Waterford City & Council was requested by Energia. However, Energia stated that “Council officials declined that offer at the time”.

At present, Energia is in the process of responding to the 37 public submissions and the seven prescribed body submissions received during the consultation phase.

An Energia spokesperson told this newspaper that “applying for a foreshore licence is not a planning application for an offshore wind farm or for any associated works. The surveys are necessary to establish if there is any basis to identify offshore areas that might potentially be suitable for a future planning application”.

Fianna Fáil Councillor Eamon Quinlan contended that the suggested proximity of the cabling and general investigative work spanning from Helvick Head to Hook Head would be visibly intrusive. He stressed this with particular relevance to those who rely on tourism for income or local house owners who are relying on a set house price.

In reply, an Energia spokesperson stated: “If we are granted a foreshore licence for the proposed surveys, as one of Ireland’s leading energy companies, we are fully committed to engaging openly and directly with all local stakeholders, including fishing representatives, port authorities and other interest groups prior to commencing our surveys. We will engage directly with communities across the South East to discuss any possibilities with them in detail.”

Should Energia be granted the foreshore licence, it would then be in a position to apply for planning permission, a process which in itself could take “several years”, their spokesperson stated.

Should the licence be granted, potential cable route corridors would be established into Tramore Bay, Bonmahon, Stradbally, Dunmore East and Dungarvan, with the proposed development area spanning between 5 and 16 kilometres from the coast.

Water depth, speed of water current and direction, wave height and wind speed will be among the criteria down for examination.

Energia’s spokesperson said the company wished to stress that “no structures will be erected onshore as part of the work and there will be no negative impacts on the marine or coastal environment.