Homelessness in Waterford ‘is solvable’

WATERFORD’S homeless problem is ‘solveable’, according to a local Focus Ireland project leader, who told a gathering at Mount Sion: ‘We could end it right now.’

“In comparison to the numbers in Dublin, to have over 100 people homeless in Waterford might seem small but it also means it’s really solveable,” said Lisa O’Brien, who is engaged in Focus’s youth aftercare and youth housing projects.

“There’s a huge focus right now on families but we also support single people and young people who are at risk of homelessness or become homeless.”

She added: “While there was a time in Waterford when a great deal of our work went under the radar and didn’t generate a great deal of attention or discussion, we need people to know what we are, what we’re doing because we need to make a difference and make improvements to what we’re doing. Services in the last number of years in the South East in general have had greater demands.”

At present, Focus Ireland has over 200 houses in its Waterford stock, made up of properties in small estates and ‘pepper potted’ (mixed) housing. “All of the people who’ve lived in our housing have experienced homelessness or have been at very high risk of homelessness,” said Ms O’Brien.

“Money such as that raised during the ‘Shine A Light Night’ (on October 18) go to services that don’t necessarily get funded through the statutory agencies and one of those services we provide is the Childcare Centre in Waterford. We have fabulous staff members who work with children who are experiencing homelessness right now or have experienced homelessness – and their parents – it’s all about trying to help them to manage the trauma that has happened to them and to navigate the system so that they can get the help they need.”

Ms O’Brien continued: “We also run an advice and information (‘AI’) service which is focused on preventing homelessness. We’re seeing these numbers of homeliness nationally, and they just keep going up and up. So while we’re trying to create services that are going to help and support those people, we also want to stop that figure going up and the AI service is the means by which we’re hoping to achieve that. Our Waterford service is on Parnell Street and more and more people are coming into us to access those services.”

Focus also runs PETE – the Preparation for Education, Training and Employment, which Ms O’Brien said helps those who have secured a home through Focus and then express a wish to return to education. Meanwhile, Focus’s Youth Service, which includes Housing First For Youth, currently assists over 40 young people in Waterford. 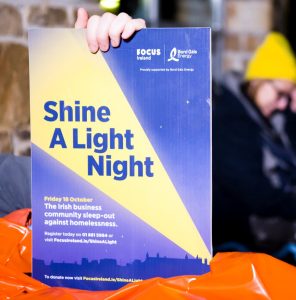 Fundraising for Focus Ireland, including the recent ‘Shine A Light Night’ held at the Edmund Rice Centre, accounts for half of the organisation’s annual budget. Photo: Helen Hogan