THE Head of Ireland’s Ancient East believes the concept, of which Waterford forms an element, has embedded itself into the country’s tourism framework.

Speaking to the Waterford News & Star, Fáilte Ireland’s Jenny De Saulles feels it has found its feet in the wake of the Wild Atlantic Way’s establishment and immediate success.

“The Wild Atlantic Way is a great initiative but it’s really easy to ‘get’ it, if you know what I mean,” she said.

“Ireland’s Ancient East was a little bit harder as a concept from the get go. But I think what’s really important for all of us to understand is that it was really designed to target the international visitor. And when you think about the international visitor in terms of what they’re coming to Ireland for, they’re coming for our culture and they’re coming for our built heritage. Our colleagues in Tourism Ireland recently carried out some research in Canada and in the United States and Ireland’s Ancient East is resonating more over there than the Wild Atlantic Way.”

Ms De Saulles continued: “If you think about Canada, for example, they have this amazing scenery and landscape so for them, coming to see our landscape isn’t that special. But when you talk about rolling green hills and you add castles and Irish culture into that conversation, that emerges as something which is really, really motivating for them. So in terms of Ireland’s Ancient East, we had 2.8 million international visitors last year, spending €1.6 billion, supporting over 44,000 jobs. And if you look at attractions across Ireland’s Ancient East, they grew by 18 per cent in revenue terms which is well ahead of the market. So while it’s taken the concept a little while to get positively moving, the industry has really gotten behind it, so have all the local authorities, including Waterford City & County Council and it is going from strength from strength. And it’s still very early days for it too. When you’re creating a destination brand like this it takes time; we’re only four years into the life of  the brand and it’s been an international market concept for three years but we are starting to see significant growth.”

Commenting on the Lismore Castle Experience, the most recent enhancement to Waterford’s tourism offering, Ms De Saulles hailed the virtual reality journey through the castle which can now be enjoyed at the town’s heritage centre.

“We’ve used 3D technology to recreate a visit to the castle so you really get the full perspective. It brings you right back to Robert Boyle’s time in the castle and ‘he’ (an actor as Boyle) tells you story, before you’re brought through to the time of Walter Raleigh and right up to modern times, talking about visitors to the castle such as Fred Astaire, John F Kennedy and (Prince) Charles and Camilla. The experience brings you on a journey into the castle in a virtual way, it shows you the rooms of the castle but more importantly it tells you some of the wonderful stories that this castle has generated.”

The attraction, which was formally opened by Taoiseach Leo Varadkar on September 6, was made possible by a €75,000 Fáilte Ireland investment, in addition to over €30,000 in funding by Waterford City & County Council.

The Lismore Castle Experience is also likely to attract considerable school tour interest, Ms De Saulles added. “Visitors of all ages are going to love this. If you’re into culture, you’re going to enjoy it and because it’s done in such a fun way, it’s also going to appeal to both children and families as well.” 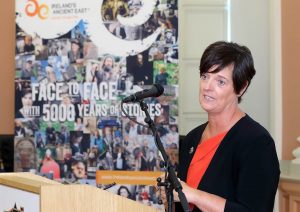