“It’s a surreal moment for everyone involved” – Phelan 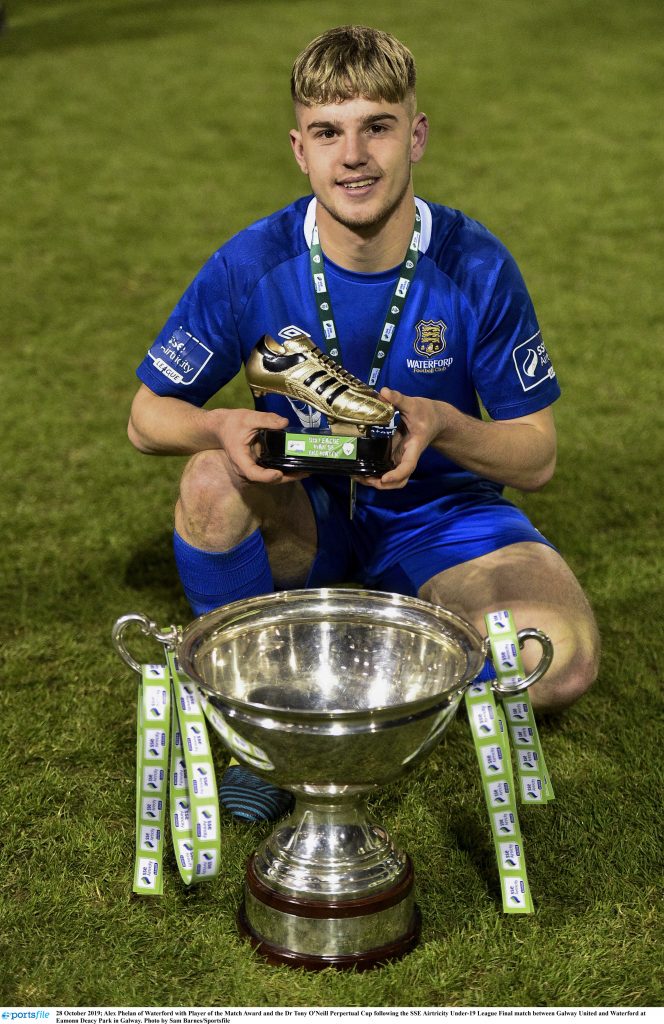 Alex Phelan of Waterford FC with his Player of the Match Award and the Dr Tony O’Neill Perpetual Cup following the SSE Airtricity Under-19 League Final match between Galway United and Waterford at Eamonn Deacy Park in Galway. Photos: Sam Barnes/Sportsfile.

After leading Mount Sion CBS to two Munster titles back in 2018, Alex Phelan has shown his class ever since he got the chance from the then Waterford FC manager John Furlong to make the step up to League of Ireland level. This form was cemented by a man of the match performance in Monday’s U-19 League of Ireland decider win over Galway United.
Phelan caused the Galway defence endless problems and before he even struck for the opening goal inside ten minutes, he was already after missing a couple of chances, but he kept fighting to eventually seal the deal with an excellent second goal in the dying minutes.
Speaking after the game, the man of the match hero said, “It’s a phenomenal feeling as we’ve fought hard for this all year so it’s great to come out at the end of the year with the league trophy. That’s what it’s about for us and I’m glad to have played a part in that.
“Since the game against Shamrock Rovers, I think that was the big turnaround for us and it probably gave us the belief that we could go on to achieve what we have here tonight. For us all, the players, the staff and the fans here tonight, it’s incredible. Everyone has done a fantastic job and it’s brilliant to come out of it with this cup.” 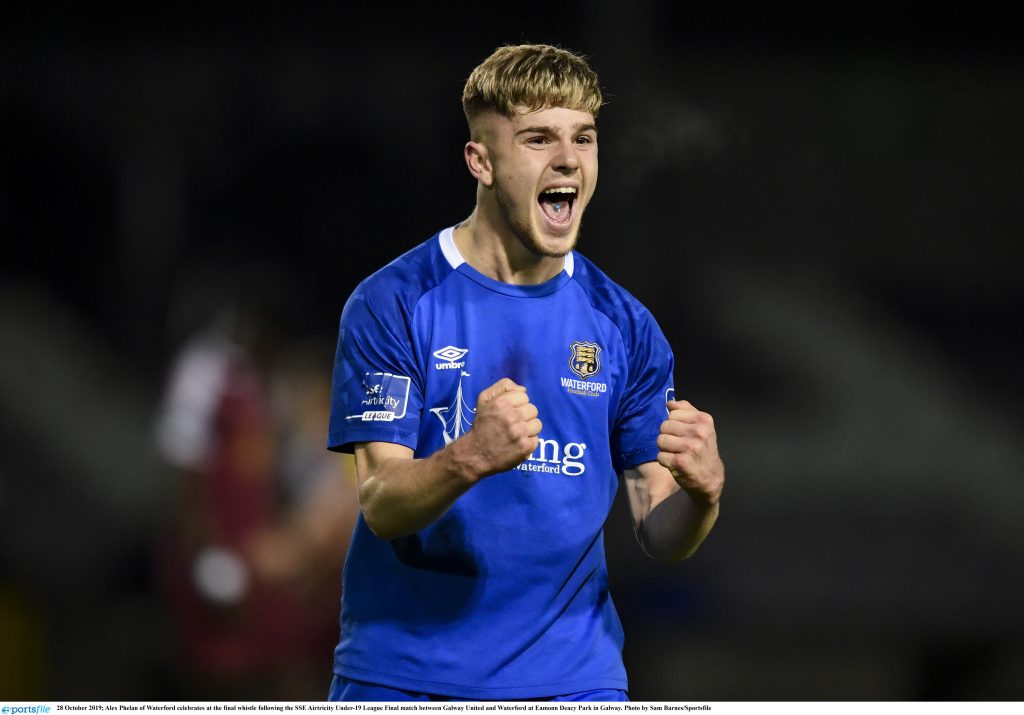 Alex Phelan of Waterford FC celebrates at the final whistle following the SSE Airtricity Under-19 League Final match between Galway United and Waterford FC at Eamonn Deacy Park in Galway.

SPECIAL FEELING
“I have to say that the quarter-final and the semi-final of the league were two mad games. They were crazy matches and we were lucky to come out on the right result. Tonight wasn’t easy either especially when it went to 1-1, but to come out of it with a 3-1 win is brilliant.
“It was a brilliant ball from Niall O’Keeffe for the first goal and I had just one thing on my mind from there, so it was great to see it finish up in the net. I suppose it was the same for the third goal. I was just going for goal and I never even thought about crossing the ball so thankfully it all paid off for us.
“I think that the two goals that I scored were both about the striker’s instinct. We’re greedy, but it pays off sometimes for us and thankfully it did for me tonight. It was a tough battle there tonight and it wasn’t as easy as the final scoreline would suggest. We knew that Galway would give us a good fight and they did just that.
“I just feel that one team wanted it more than the other and we wanted it that bit more. We have a group of players that are fantastic. We fight day in day out for each other to achieve goals like this and it’s a great way to end a brilliant year. It’s special and we won’t forget tonight in a hurry.”