LINKING Mahon Falls to the Waterford Greenway is on the City & County Council’s ‘to do’ list, Comeragh District Councillors were informed at their October meeting in Dungarvan.

Responding to District Chair Liam Brazil’s (FG) comments on the need to promote the Crough Wood walking trail, Council Head of Enterprise Office Richie Walsh said the ongoing works at Mahon Bridge formed a link in a much bigger chain.

“The biggest problem with Crough Wood at the present moment is that there’s still work being done down to Mahon Bridge and it would be hoped that (in time, the trail) will be extended down to Kilmacthomas and will ultimately join up with the Greenway,” said Mr Walsh.

“And even more importantly, we’re already speaking quietly with the Department about extending Crough Wood upwards – properly, this time around – up to Mahon Falls so that there’ll be a Comeragh/Mahon trail properly done.”

Work on the 750-metre long, 2.2-metre wide walking trail from the existing entrance to Crough Wood down to Mahon Bridge is ongoing, with many locals and visitors already accessing the extended trail.

Cllr Brazil described the trail as “a fabulous amenity with great potential”. Addressing Mr Walsh, he said: “The Crough Wood walk is being extended at the moment and when the works are finished there, we’re going to have a great facility for the people of County Waterford and beyond because they’ll be able to walk from Mahon Bridge all the way up to the Mahon Falls. I travel that particular road (the R676 between Lemybrien and Carrick-on-Suir) a lot and a question a lot of people ask me is why haven’t we advertised moreso on the main roads in and around Mahon Bridge because it’s very much a hidden gem we have there.

Richie Walsh replied: “One of the biggest problems with advertising the Crough Wood is that there are huge limitations on car parking there at the moment so that will have to be addressed as part of the bigger plan and it’s only then that you could properly promote and advertise it, all the more so when you have the facilities and structures to support more visitors in place.” 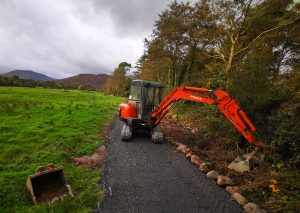 Work on the 750-metre walking trail from Mahon Bridge to Crough Wood is nearing completion.