TRAMORE native Alan ‘Marathon Man’ Corcoran has raised almost €16,000 for two worthy causes having swum the length of the east Irish coast over the summer.

“I’d a few six-hour days in the water, and quite a few days when I was swimming for five hours as well, so you’re talking about 153 hours of swimming in total to get down here,” Alan told the Waterford News & Star after completing his epic swim.

“In general, most days were in and around the four-hour mark in terms of swimming; I built up the hours and built up my endurance and thankfully all of that hard work paid off.”

Alan embarked on this extraordinary challenge from the Giants Causeway on June 1 last in memory of his father Milo, a former FAI President, who suffered a stroke in 2011 and died of cancer in 2016.

“I’d never have done the (marathon) lap of Ireland if Dad hadn’t had the stroke and I highly doubt I’d have swum the length of Ireland if he hadn’t died of cancer,” said Alan, who ran 35 marathons around Ireland in 35 days in 2012.

“This has been my way of doing the best I can in the circumstances that have faced us. I was trying to grasp at a positive by raising some money for charities that try and help people who’ve been affected by cancer and stroke. None of this will bring him back but it’s given me something to focus on since he died; it’s made me feel like I’ve been doing something good and doing him proud.”

He continued: “Losing my Dad has been the toughest experience of my life. I was determined to try create some positives from that point of despair. I’m delighted today to be presenting almost €16,000 to the Irish Heart Foundation and Solas Cancer Support Centre on behalf of my dad, family and support team. My family and I know first-hand how important it is to support and care for people diagnosed with cancer and living with stroke, as well as their families and carers. I’d like to thank everyone who supported me through the challenge and donated to the two fantastic causes.”

Said Dee Jacques, a grateful Solas Cancer Centre Chairperson: “This is not the first challenge Alan has undertaken to fundraise for our charity and we really appreciate his huge efforts. Seeing him in Tramore in July at the end of his challenge was both emotional and inspiring.”

Ruth Guy, Commercial Director of the Irish Heart Foundation, echoed Dee’s sentiments. “We are incredibly grateful to Alan for his support and generosity since 2012. His strength and commitment to making a positive difference in the name of his father are a huge inspiration to all of us in the Irish Heart Foundation. This generous donation will make a real difference to people we support around the country who live with the effects of heart disease and stroke.”

You can still donate to Alan’s challenge by visiting http://www.marathonman.co/donate/ 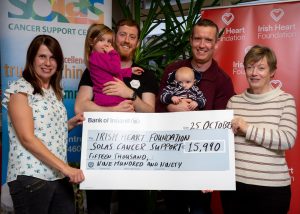 At the presentation of a cheque generated by Alan Corcoran’s fundraising swim in aid of the Solas Cancer Support Centre and the Irish Heart Foundation were, from left: Deirdre Purcell with Aoibhe, Alan ‘Marathon Man’ Corcoran, along with Jamie, Evan and Marie Corcoran.