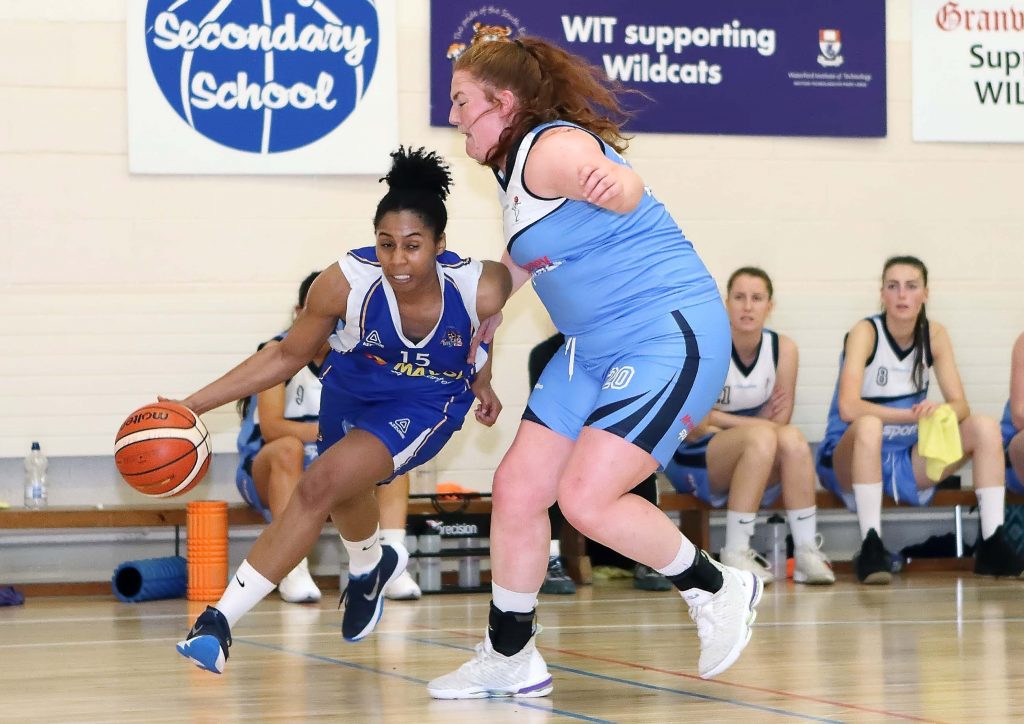 WIT Wildcats’ Jazz Walker cuts down the outside of Maree’s Maggie Byrne in the Mercy Gym. Photos: Noel Browne.

This Super League game between two teams placed joint second on the table with three wins each from four games was expected to go the Wildcats’ way with home advantage. However, it was the visitors Maree from Galway who proved best on the day.
The visitors were good value for their win as they had quality players who made the best of every opportunity. Wildcats on the other hand struggled for long spells of the game as their ragged defence proved costly.
Playing without both Meibh Maher and Cathy Kavanagh, out injured, and will be for some time, it was imperative that those available brought their A game to this crucial encounter and for the first two quarters they did and went to the break leading 45-42, mainly thanks to Sinead Deegan who hit nine points, all three pointers and Jazz Walker and Steph O’Shea who totalled 30 points between them. However, Sinead Deegan twisted her ankle to add to Wildcats’ injury woes.
This was to prove costly for Wildcats who lost their way at times, turning the ball over and committing careless fouls which Maree were grateful for and made the most of their chances on the free throw line. Such was not the case for Wildcats who only converted five from 14 on the line in the second-half.
As the game progressed Wildcats were struggling to stay in touch. Indeed the difference would have been much greater but for some outstanding performances from Wildcats’ youngest players. Abby Flynn was superb under pressure at point guard as was Debbie Ogayemi who finished as the game’s top scorer with 20 points while Robyn Morrissey, playing her first game at top level made a healthy contribution with two wonderful three pointers. Their efforts had Wildcats in touch trailing by just five points with four minutes to play but though they had a number of opportunities to pull the game from the fire, their efforts were off the mark and it was the Galway side who put further distance between the teams at the game’s end. Wildcats have a lot of soul searching to do if they are to be in the right frame of mind for this weekend’s away clash in Cork against Glanmire.
Top scorers for Wildcats: Debbie Ogayemi 20 points, Steph O’Shea 16 and Jazz Walker 15.