THE TIP OF THE UHW ‘ICEBERG’

A MEMBER of staff at University Hospital Waterford’s Department of Psychiatry (DOP) has told the Waterford News & Star that issues raised in the national media last week represented “the tip of the iceberg”.

“The problem with patients sleeping on chairs and floors is old news…people don’t know the half of what goes on behind the doors of the DOP,” the staff member said.

“People are sleeping on trolleys in the ED for the same reason that they’re sleeping on chairs in the DOP, a lack of space. But it’s what happens once they’re here that that people need to be told.”

One of the more serious issues in the DOP and other wards in the hospital, according to the staff member, is that hired security staff – akin to those working in shops or nightclubs – are at times being called upon to care for vulnerable patients.

“Health Care Assistants (HCAs) play an extremely important role in the hospital by providing one to one care to patients that need it the most,” the staff member said.

“However, HCAs are expensive and are paid overtime and supplementary rates, whereas security guards, who, in many cases have very little English and have come to the hospital from, say, a building site, don’t receive those extra rates and overtime.”

The staff member alleged that security guards, some of whom have never previously worked in a hospital, have, at times been left ‘more or less’ in charge of vulnerable patients who require a specialised level of care, particularly during stressful episodes.

Meanwhile, the psychiatric nurses association (PNA) is hosting a lunchtime protest at University Hospital Waterford this Friday, owing to the unprecedented overcrowding experienced at the DOP.

“More experienced security guards have raised their concerns with hospital management “multiple times” regarding the less trained and inexperienced guards being employed at UHW “yet nothing has been done about it.”

The Waterford News & Star has seen an incident report, filed in UHW recently, about a ‘special’ patient who escaped and was out walking on the Dunmore Road. At the end of the report, the security guard has signed “I no englesh’. 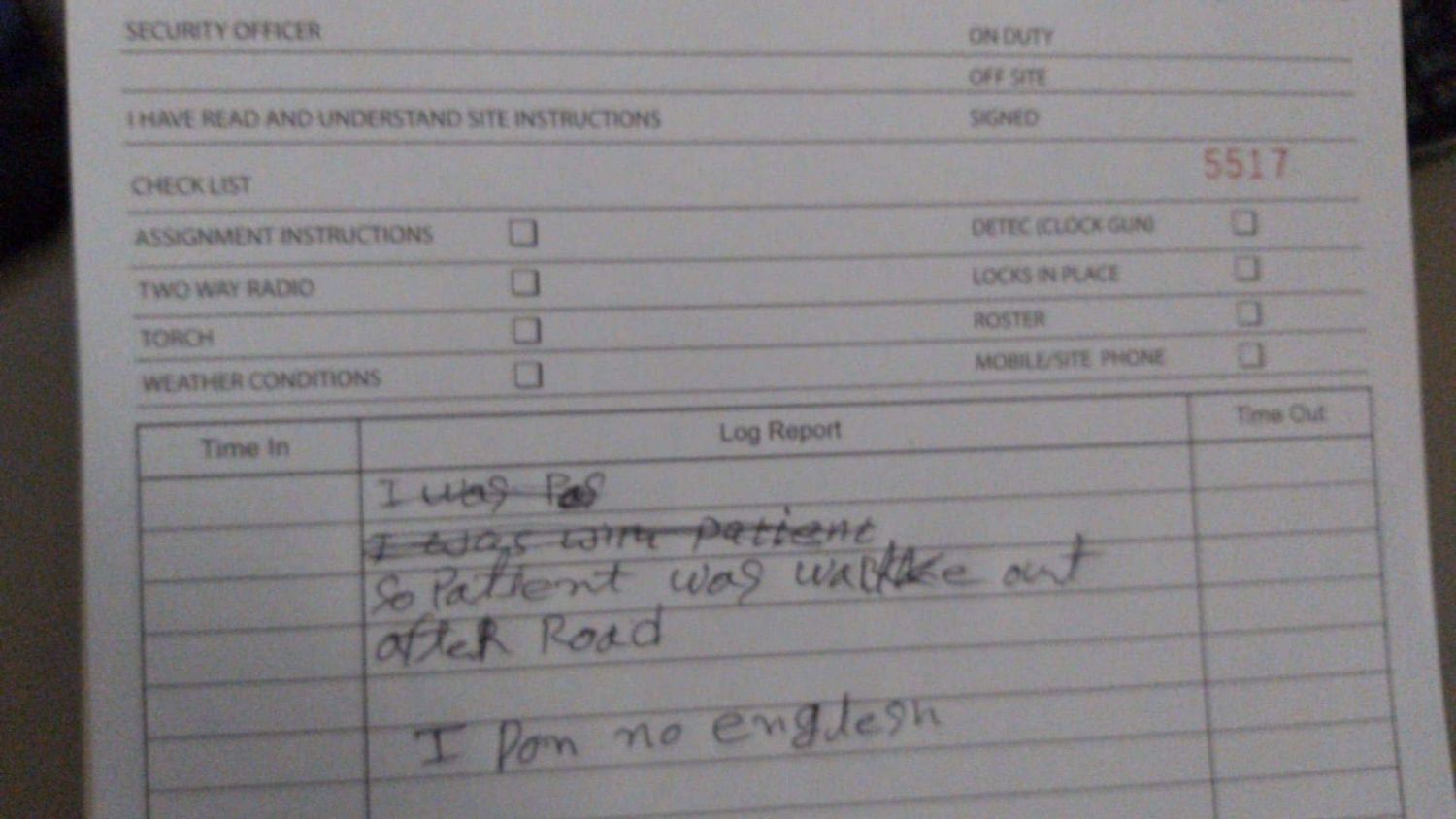 In February of this year, the Union responsible for the security guards, UNITE, contacted UHW Manager Grace Rothwell to raise their concerns about these practises in the DOP.

“They are consistently put at risk of serious infection by not being informed of the specific disease of the patient they are interacting with or restraining while medication is being administered. When our members question if there is any potential infection risk, they are told that ‘patient confidentiality’ must be upheld.”

Mr Kelly goes on to say that the “restraining of patients” involves their members having to hold the arms and the legs of patients who in most cases are suffering from dementia and are elderly.

“The type of incidents experienced on a daily basis by our members when taking care of ‘specials’ goes far beyond the required duties of a security guard,” Mr Kelly said.

“They are then expected to go home to their families having witnessed incidents of “self-harm” and having to protect themselves against attacks from psychiatric patients while holding them down for medication to be administered.”

According to UNITE, security guards are contacted by Ambulance control, who inform them when an aggressive patient is en-route and “to be prepared”. The patient is then left with security staff.

Tony Kelly said that the union met with MCR, the agency who provides the staff in November of 2018 to “express concerns regarding the demands being imposed on our members and the risks attached to the duties expected of them.”

According to Mr Kelly, MCR committed to seeking a meeting with UHW management to convey their concerns and also to “discuss the remuneration” paid to members when taking into account all of the above expectations required of them.

MCR subsequently informed UNITE that they had discussed the issues with UHW who informed them that they were “unable to meet Unite Unions request due to strict budgetary constraints”.

The UHW staff member told the Waterford News & Star that patients in the DOP are closed off from the world and largely “forgotten about”.

“There’s CCTV in the DOP but they’re non-recording,” the staff member said. “It’s frightening to think that what goes on behind those doors is completely hidden from the rest of the world.”