FATHER Gregory (Greg) Power, a native of Ballingarry, Kill, was remembered at his Requiem Mass as a hard-working and noble man who dutifully served in eight parishes across a distinguished 68-year priesthood.

During a well-considered homily at Our Lady of Mount Carmel Church in Kill on Tuesday last (October 29), Bishop of Waterford and Lismore Alphonsus Cullinan paid tribute to Fr Power, who died on Friday, October 25, aged 95.

“When I think of Father Greg, I think of the word ‘noble’,” said Bishop Cullinan, wearing vestments that Fr Power himself had worn while celebrating Mass.

“There was something noble about him, a nobility which was formed first in his family home with his mother and father (Annie And Jack) and siblings, learning the virtues of being a good son, a brother and friend and then he felt the stirrings of a vocation to the priesthood and went to Maynooth, leaving there in June 1951 to being in his priestly life. He was ordained on June 17, 1951…and then he sought to spread the Kingdom of God through his priesthood.”

Given the number of priests in Waterford and Lismore at the time of his ordination, Fr Power was sent on temporary mission to the English north east, to Hexham in Newcastle to be precise, where he served for just under four years.

In January, 1955, he was recalled to the Diocese and appointed to Clogheen in South Tipperary, before moving onto Stradbally in 1960.

In 1961, Bishop Cullinan told mourners, Fr Greg was appointed to Ballybricken. “He had a long association with that part of the city and indeed further out in what is now St Paul’s and he was in the Lisduggan area, in St Paul’s, from 1968 until 1984, being appointed curate in February 1972 and later serving as Parish Priest in that same parish,” he stated.

“He laid the foundations (of a new parish) well before St Paul’s was divided up from the old Ballybricken Parish and I heard him say more than once that his work there gave him a new lease of life, where he applied himself to the challenge of starting new. He told Fr Pat (Fitzgerald of St Paul’s & Butlerstown) once that ‘to play a part in the development of a community and the building of a new church is a once in a lifetime opportunity’. And indeed he was thankful for the providence which placed him in Lisduggan at a time when there were green fields, which in time gave way to the modern world of development.”

Fr Power garnered great support from the men and women of Lisduggan who worked with him over the course of his service there, the Bishop continued.

“A frequent tactic of his in his early days was when someone proposed some new initiative, he would try to get that person to spearhead the venture themselves. A man of few words, he won people’s confidence by his own quiet, dedicated, wise service. He was a good worker and seemed to visit every house in the parish many times.”

In June 1984, Fr Greg (who was also an accomplished Irish speaker) was appointed Parish Priest of St Mary’s in Clonmel and that same year was appointed to the Cathedral Chapter.

He then served as Parish Priest in Dungarvan from August 1988 through to 1997 before becoming Pastor Emeritus in Stradbally in 1997 through to his retirement in July 2005.

Thereafter, Fr Power lived in a house alongside St Mary’s Church in Clonmel and in October 2016, he moved into St Joseph’s Home in Ferrybank, which is run by the Little Sisters of the Poor.

Said Bishop Cullinan: “I think we can all say that he genuinely tried to do as much good wherever he went, solving problems in that quiet, gentle but authoritative way.”

Old age came slowly for Fr Greg, but “he didn’t find it easy,” Bishop Cullinan reflected. “I have to say that the frequent visitors he had, especially Father Eanna (Condon) were a great help to him and Fr Eanna of course was responsible for Greg buying that motorised ‘thingamabob’ that he took so often on his journey around the Little Sisters of the Poor in their beautiful nursing home and convent, and indeed he would venture out, and that gave him a new lease of life so we thank Eanna for that.”

Fr Power admitted to Bishop Cullinan that “he had to re-learn his faith, trying to re-learn how to cope with this stage of life. There is a line in sacred scripture, ‘My flesh and my heart may fail but God is the strength of my heart and my inheritance forever’.”

Fr Power’s niece Geraldine, speaking on behalf of the extended Power and Kennedy family, described him as “a smart person with a remarkable brain…he led the usually nomadic existence of a Diocesan priest before ending up in 2005, living out his retirement in Irishtown in Clonmel”.

She added: “He was quite a remarkable man. He was a priest’s priest. In other words, he was highly respected by his fellow priests. Everywhere he served, he left a remarkable legacy. He had a remarkable effect on people. He could get individuals to do things that they didn’t think themselves that they could accomplish…and his achievements in his early days at St Paul’s were remarkable.”

“I remember well when Fr Greg would join us on family holidays and Dad and Fr Greg would head away for a day or two themselves, it was like their own little retreat. Over recent times, Fr Greg was a great comfort to my Dad when our Mam passed away in 2010. He was a fantastic priest and community worker. His advice was sought after by many. Whether it was his Diocesan work in the various parishes he was in, looking for more teachers for the schools he got involved in, working on behalf of his parishioners and sorting out some local disputes…he knew how to get things done for the benefit of all.”

Fr Arthur, a former Parish Priest of Portlaw & Ballyduff, who led a Decade of the Rosary in the church prior to the burial, proudly told the congregation: “We were friends since 1943.”

Bishop Emeritus William Lee was in attendance as were up to 40 other priests of the Diocese, in addition to nuns drawn from several orders. Michael Kennedy, a former Parish Priest of Dunhill who ministered with Fr Power in Dungarvan, was also among the mourners.

The readings were delivered by Geraldine Power and Christine Fenn, with Prayers of the Faithful offered by Sister Anne O’Sullivan, Anne Kennedy, Martin Kennedy, Sr Grace Redmond, Lucy Mulcahy and John Power. The soloist at the Requiem Mass was Marie Smith while Sean Hennessy was the organist.

Father Gregory Power (baptised as Patrick) is survived by siblings Martin, Vincent and Nancy (in Chicago), siblings in law Joan, Siobhan and Johnny and his many friends drawn from religious orders across the Diocese of Waterford and Lismore, including Bishops Cullinan and Lee. He was predeceased by parents Jack and Annie and his siblings Peg, Mary, Noel and Michael.

Following Requiem Mass, Fr Power’s remains were interred in Faugheen Cemetery. May he rest in peace. 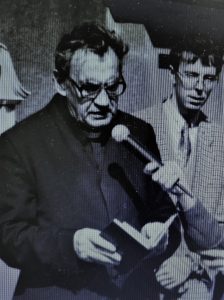