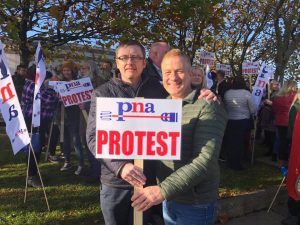 THE election fun and games have begun with emotions running high between Sinn Féin’s TD David Cullinane, and Fianna Fáil’s Eddie Mulligan. Following a spat on social media last week, the on-off relationship seems to be temporarily back on, with both parties uniting at the protest outside University Hospital Waterford late last week in support of improved psychiatric services.

The Fianna Fáil election hopeful claims, “It’s time for a change. The way we’ve been voting is not working for Waterford.” This statement was slammed by Sinn Féin’s Cullinane who hit back saying, “We have been voting Fianna Fáil and Fine Gael for years. Eddie is right. Time for a real change.” Such school-yard tactics seem to have been put aside temporarily for the sake of a united front at the protest last week, with Eddie Mulligan commenting, “I think there’s a bromance developing with David after our social media tiff.”

Tensions are undoubtedly running high, now that Sinn Féin have selected David Cullinane as their Waterford candidate for the next general election but it seems that these tensions are playing havoc with this very public relationship! Waterford can expect a series of the same in the election lead-up with all candidates lobbying for public favour.