‘Build it and they will come’ 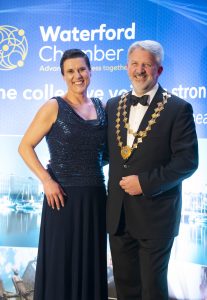 THE 232nd Annual Chamber of Commerce dinner took place last Friday in a splash of glamour and with a strong sense of community. Speakers on the night included former athlete John Treacy, Waterford Chamber President Jonathan Earl, General Manager of Manguard Plus Jonathan Pim, with Keynote speaker, Ambassador of Ireland to the United States Dan Mulhall.

The entire evening served as a reminder of all that is note-worthy and important about Waterford and being able to claim Waterford as part of one’s heritage. Ambassador Mulhall spoke at length of the importance of the economic ties between the United States and Ireland. “The people of Waterford are doing global jobs with a can-do mentality”, benefitted greatly by Ireland’s proximity to the EU and highlighted by the fact that Ireland is the 4th biggest export market for the UK.

“EU membership was of massive benefit to Ireland, as we can see by the mess inflicted on our nearest neighbours, dominated by that rough beast called Brexit,” a nod to the swell of unrest in the UK at present.

A former Mount Sion student under the guidance of Brother Gleeson, his humility and gratitude at the early educational roots which shaped him was clear from how affectionately he spoke of his time there. Dan Mulhall concluded with a prediction that with the global image of Ireland changing from an underdeveloped agricultural country to a booming economic powerhouse with strong ties across the seas, “the next twenty years will show much development in Ireland”.

These sentiments were echoed by John Treacy, who credits Waterford for providing the springboard for his Olympic career. Running seven miles of the roads of Dungarvan every morning to school led to his eventual silver medal in the Los Angeles Olympic Games in 1984. The tenacity to run a sustained distance at that level in varying degrees of undulation and temperature is proof that “hard work gets you places” and his views extend to how Waterford is responding to economic challenges and redeveloping its face to attract higher rates of tourism and industry.

“Build it and they will come” was his feeling regarding the success of the Waterford Greenway and the industrial strength exuding from Waterford. “Be ambitious and reach for the stars. This is a fabulous city in a fabulous county.”

President of Waterford Chamber, Jonathan Earl agreed with John Treacy’s reminder to be ambitious. He credited Waterford Chamber for its involvement in Waterford City and for the confident direction which Waterford was taking in recent years. However, he issued a stern warning that “we need population growth, we need people to choose Waterford as their home.”

This warning continued with a no-nonsense message that on its own positivity is important but “positivity is not enough, we need the kind of confidence that people are jealous of. Hope and confidence are essential for the community”.

A message of celebration for the changing face of Waterford formed the fabric of the evening, which was sponsored by Manguard Plus, yet the room was reminded that “people knock Waterford” and that is a fact that cannot be avoided or ignored. To address those views, they must be met with confidence in the strength of Waterford and in its ability to continuously develop, as both a city and an innovative, people-centred hub.