THE stove is glowing in Noel O’Sullivan’s sitting room as we chat about a life which has taken him from his birthplace in the Limerick townland of Kilbenehy to his home on the fringe of Kilmeaden.

Noel, a familiar face to generations of hurlers and footballers through his refereeing career and to thousands of Walsh Park attendees as a steward, cuts the jib of a happy man. And an hour spent in his corner of Port Láirge does little to shift such a perception.

One of nine children, son of Sonny and Mary, (“I’m the only of the three boys still alive”), Noel commented: “sure I hardly need to tell you, it was hard at that time”.

Sonny was a sawyer by trade and work brought him to a sawmill at Coolfin, just outside Portlaw on the Waterford approach to the village. “Himself, Ned Dooley and Maurice Nugent (who died in January 2017 aged 101) were all working in the mill at the time; there was a brickyard there as well. The pond in Coolfin was used to drive the wheel but the sawmill was driven by a tractor engine with a big, long belt like what you’d have had on the old threshing machines.”

Christened in Newscastle West (West Limerick), Noel reflected: “Sure we were travelling from the woods; sure I was born looking out through the spokes! But we came to Portlaw (in the late 1940s) when I was about five years of age and we lived in the huts in Coolfin, across from the Soldier’s Trees, the huts belonged to the sawmills. And after a few years there we moved to William Street and from there we moved into 3, George’s Street when the family was getting bigger.”

Noel, his eyes dancing, continued: “When I was in school I went to the (Mercy) Nuns until I made my First Communion – there were two different primary schools in Portlaw at the time (which remained the case until 1992) – and then I went onto the Boys’ School and Peter Lyons taught me. I’d done the Primary (Cert) and I’d gone as far as I could when my father came up one day (February 2, 1956) and he said: ‘You’ve an appointment in the Tannery. Dick Murphy is the foreman. There’s a job going there so go down to him.’ I was only 13 and a half at the time. So before I went down, I had to take off my short trousers – that’s what we all wore at the time – and put on my Sunday ones, the long ones and I got the job anyway, so I started hanging sheets of leather.

“But the job came with a condition that I went to the ‘Tech’, twice a week at night time on Number One, Brown Street – it was Bowers’s house at one time – Jim Timmins (synonymous with St Declan’s Community College in Kilmacthomas) did the carpentry work and Siobhan Donoghue did Irish, which is where I learned most of my Irish. I’m a fluent Irish speaker to this day and while we learned Irish in school, the Tech is where I developed my love of the language. I always liked it. We had music too in school, the flute and the mouth organ and I still have the mouth organ from then. I take it out and play it for the grandchildren and it keeps them happy – just don’t ask me to play it for you now! Sure we played teams around Davy Foran’s field when the juvenile (GAA) leagues were played down below there, it was a great bit of craic at the time. But I worked my way through the Tannery and I ended up working in every department.”

What the Glass Factory was for the city, the Tannery was for Portlaw and for Noel, life in the lime yard was the toughest brief of all there.

“It was all physical,” he said. “An average day in that job left you fit for nothing after you’d come out in the evening. With Health & Safety the way it is today, what we did then wouldn’t be allowed now. You had pits nine foot deep and a nine inch plank between them, maybe in for about five metres, and you carried in two hides. There was lime and sulphur in those pits and many the fella went into it. You’d haul them out and then you’d hose them down and when you were hosed down that way, you’d have to go down to the boiler and dry yourself out for about two hours. Luckily enough, I never fell in, thank God. I pulled out two fellas who’d gone under. One of them was a Cahill from Clonea. He fell in with his hat on and he came back with the hat still on him! If you fell in, that was one thing, but if you fell in and went under the hides, that was really dangerous. It was tough.” Noel spent 29 happy years in the Tannery, and was there right until the gates shuddered shut in 1985.

Work there was not without its romances – there’s many a Tannery baby still in circulation – and it was there that Noel met his future wife Nancy (nee Power), where she also worked.

“We were married in 1966 so we’d have met for the first time around 1962/63 and this (house) was Nancy’s family house. There were plenty of matches made out of the Tannery alright and 50-plus years and five children later, sure it’s not worked out too badly for us since.”

Noel had a grá for Gaelic Games from an early age and won his first club medal as goalkeeper in the Under-16 hurling championship-winning team “in 1957 or 58”.

His senior career saw him line out in five County Championship successes with Portlaw, in addition to two Munster and one All-Ireland Inter-Firms titles with the Tannery.

“It was a great period for the club and sure there were some great players on those teams, Tom Cheasty, the Phelans, Martin Hickey, John Galvin and so on…and sure I played a bit of soccer and all with Evergreen when I shouldn’t have been (when the ‘Ban’ on ‘foreign’ games was still in place). Paddy Halley used to say: ‘you were always missing when the photo was taken! And I won three Leagues with them. I enjoyed my sport a lot and I played up to 1979. I’d 12 years at the top level, played inter-county for Waterford with some great players and I’ve great memories of those days.”

Life as a GAA referee began for Noel back in 1959 (an Under-16 match between Clonea and St Molleran’s) and a fortnight ago he officiated at Primary Games. “It’s only seven or nine-a-side I’m refereeing now but I still love it. The schools still ring me to up to help out and it’s great. It keeps me going. My father was a ref before me and I read up about refereeing afterwards and got into it in a big way once I stopped playing. In 1983 alone, I refereed seven finals, from senior down and it’s not been done since. I’ve always enjoyed it and it’s easy to keep doing something when you like it, but I’m glad I’m not reffing senior games now because some of the verbal abuse refs get today is terrible. Action isn’t being taken against it either and that’s the only way you’ll ever curb it.”

Noel, who, post-Tannery, worked as a roofer and at the Kilmeaden Cheese Factory (for 12 years), is synonymous with the Waterford & Suir Valley Railway, which is just up the road from his home. The railway runs alongside the Waterford Greenway, which has proven a most happy marriage.

“You’re going back to 1998/99 when we started it and it took a while to get things going and it’s a lovely venture. We had to rebuild all the platforms, get physical railway line and narrow gauge it all, cutting the sleepers to match and we laid about 300 yards of it a day. You’ve an 11-kilometre line all the way to Bilberry now and sure if planning permission hadn’t been given for houses on the line into the Iron Foundry, it should be running all the way into the city – no-one thought about the future potential of the line at the time. More’s the pity. But what we have is great and something to be very proud of. And between the Greenway and Mount Congreve, sure the level of activity is fantastic.”

So how satisfied is Noel with life and all that has gone before him to this point? “I’m two hundred per cent happy with it,” he replies. “I’m quite happy and content. Any day that you’re able to put the two legs on the floor and stand up, you’re alright!” 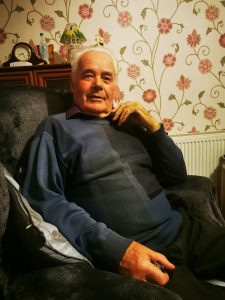 Noel O’Sullivan, a picture of contentment in his home, which flanks Ballyduff and Kilmeaden. 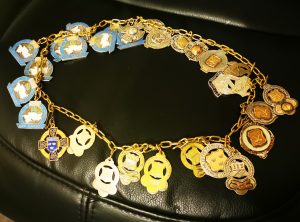 A selection of the county, provincial and national medals Noel attained over a course of a successful career in Gaelic Games.