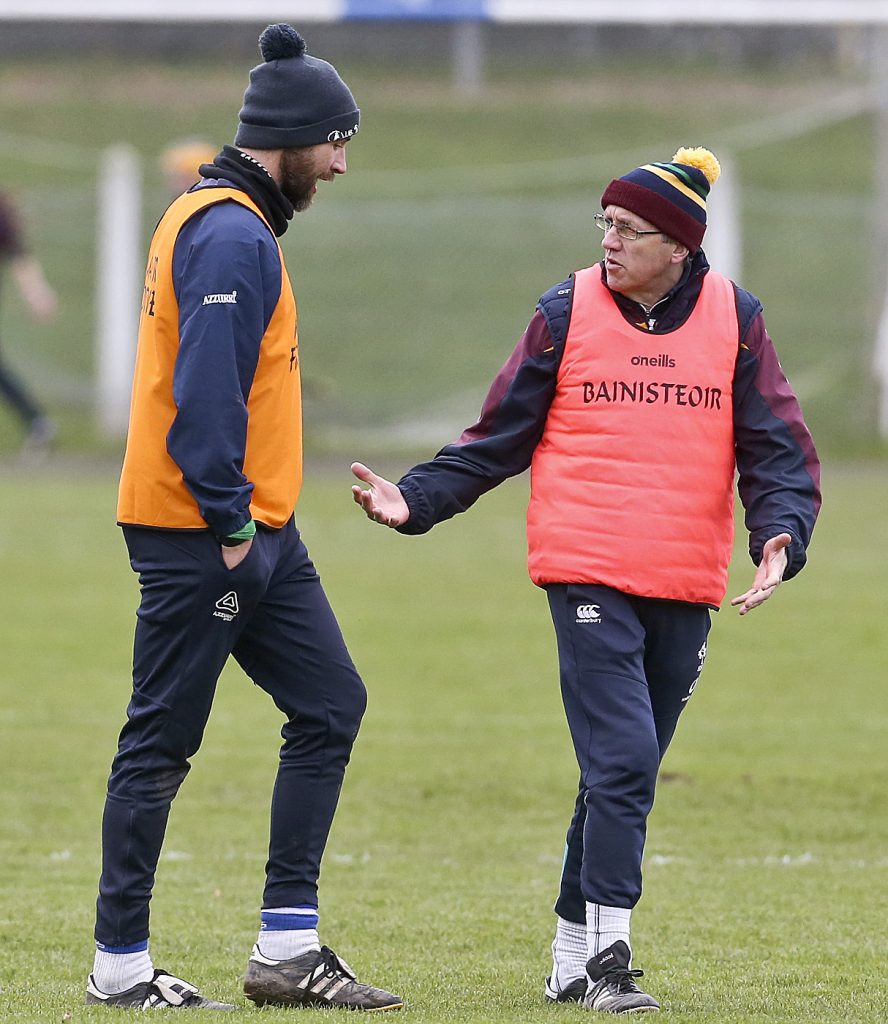 St Marys manager and coach Declan Fitzpatrick and Dan Shanahan in conversation during Saturday’s win over Castletown-Ballyagran. All attention is now on Saturday’s clash with Carrick Davins in Clonmel. Photo: Sean Byrne.

Waterford champions St. Mary’s face a quick turnaround following on their hard earned win over Limerick side Castletown Ballyagran when they make the short journey to Clonmel on Saturday next to face Tipperary champions Carrick Davins in the Munster Junior Hurling semi-final. On a big weekend for Waterford Club hurling that sees Ballygunner and Ballysaggart in final action this will be a particularly tough assignment for the Waterford champions as they will be facing a Davins team bouncing back to Intermediate ranks after just one year in the lower grade.

A TRADITIONAL STRONGHOLD
In terms of tradition and experience the odds are stacked firmly in favour of the Carrick side who can boast a Munster Club senior title win in 1966 when, with star Tipp seniors in Mick Roche, and the Ryans P. J. and Jimmy when they beat Ballygunner in the final. The following year the Davins lost out in the final to Clare side Newmarket-On-Fergus. The connection with that team is maintained to this day with long serving midfielder Michael Ryan, son of aforementioned P. J. a big man in this current Davins team. Another interesting connection with Munster Club competition in the Davins team is outstanding defender Adam Foran who is a grandson of well known referee of the fifties and sixties Tommy Foran who refereed the famous first ever 1964 Munster Club final in Cashel between Mount Sion and Glen Rovers which was abandoned after a pitch invasion by some Glen Rovers supporters.
The Davins were surprisingly relegated from Intermediate last year and were shocked in the Southern Junior Final by Skehenarinkey of Ballyporeen this year. They quickly recovered, however, from that setback to beat Toomevara in a quarter final replay before going on to beat another senior club second string Clonoulty in the semi-final. In the county final they hit top form to score a decisive win over Arravale Rovers. There is a strong mix of youth and experience in the side with Raymond Cooke, Lee Mackey and Stephen Cronin in defence while Willie Dwyer is their big man in attack. Also in the side are the Whelans Michael and Conor both All Ireland minor winners with Tipperary while Michael was on the U-20 winning panel last year.

SAINTS WILL RELISH THE CHALLENGE
On the face of it St. Mary’s face a difficult examination on Saturday but they are a determined side and they will relish going into this game cast in the role of underdogs. Dan Shanahan will have them well tuned and ready to face whatever the Davins will throw at them. They may have no big names in the side apart from former county star of his Tallow days, Aidan ‘Ringo’ Kearney but they have outstanding hurlers who can hold their own in any company in former Down player Brendan McGourty, Denis Coffey, Kevin Sheehan and the Kearns boys, Eoin and Mike, who have been outstanding throughout this championship. Indeed, a feature of this game could well be the duel between the big men on both sides, Mike Kearns for St. Mary’s and the outstanding Raymond Cooke at fullback for Carrick Davins.
The proximity of the venue to both clubs should ensure a big crowd and a good atmosphere in the Clonmel Sports Ground on Saturday with St. Mary’s quite capable of upsetting the odds.