No wage increase for waterford workers 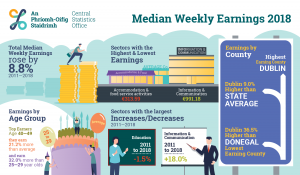 Fianna Fáil’s Cllr Eddie Mulligan commented on the analysis, saying, “If anyone needed to see evidence that the recovery hasn’t yet reached Waterford yet, there it is in black and white.” Waterford is currently sitting close to the bottom of the leader board showing a mere 5.2% in wage increase from 2013 to 2018 while neighbouring counties like Kilkenny experienced a wage increase of 8.1%.

Average annual earnings per individual earner in Waterford are coming in at €34,423, some 11% behind the national average and a much larger 28% lower than Dublin.

Nationwide the sector with the highest weekly earnings was the Information and Communication sector, generating income of over €1.2m in 2018. This supports the growing trend of interest in technology and innovation courses in colleges, and particularly justifies the funding allocated nationwide into this sector.

The South-East as a whole is recorded as earning the lowest wages across the country, with the exception of the border counties, with a total net pay of €546.99. This is recorded as a median figure, meaning half of all employees take home less than this figure. Such stark figures highlight a very prominent gender pay gap and an ever present realisation that Waterford has not experienced the growth following the recession that other counties seem to have benefitted from.