VIEW FROM THE GREEN ROOM: Bridge of sighs and lies 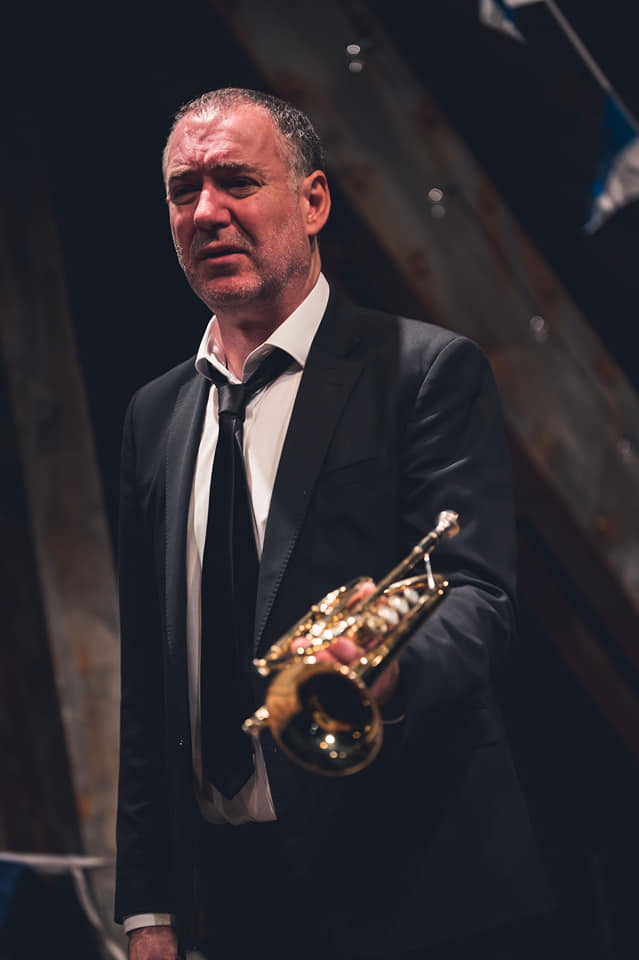 Brian Doherty as ‘Dog’ in Jim Nolan’s ‘The Red Iron’.

JIM Nolan has been writing plays for 40 years now and is a master storyteller. That’s his secret; it’s what keeps audiences coming to his work. The apparently simple storyline of six friends gathering to say goodbye to one of their ‘teenage gang’ of 20 years ago explodes across the Garter Lane stage in bursts of uncontrolled anger as grenade-accusations tumble out of… why?… what happened?… where were you?… why didn’t someone shout ‘stop’?

It’s a broken night in the Déise on the night the Waterford hurling team returns, following their 2017 defeat by Galway in the All-Ireland Final. Set designer Dermot Quinn’s magnificent derelict bridge is a metaphor for a whole world of ‘what might have been’. Broken dreams hang in the air. ‘Dog’ (Brian Doherty) is already lorrying into the tinnies and has decorated the derelict bridge with Waterford bunting and flags along with the Mount Sion jersey worn in memory of their friend Joe Sinnott who has hanged himself from the bridge.

One by one the friends gather to wake ‘Sinner’s’ memory. All have issues. Close friend ‘Scabs’ (Michael Quinlan) cannot accept his friend’s death and wants answers about why he did it. Party-gal ‘Dettsie’ (Greta Rochford) has had a lifetime of dealing with a controlling husband and wants to wake Sinner with a bottle of Prosecco. ‘Zorro’ (Keith Dunphy) smokes his way through his grief on a few joints as he remembers a lifetime of drink, drugs and minor skirmishes with the law. ‘Charley’ (Jenni Ledwell) just wanted to sing opera, has had some success before life intervened with the death of her young husband. With a young daughter, Charley is now a teacher. ‘Kel’ (Neil Ditt) returns from England to pay his respects and a whole history of pain travels with him. All are united by kindnesses shown to them by Sinner at crucial stages in their lives and they all want answers about what happened to their friend.

And Dog seems to have a lot of information that begs the other question of where exactly he got such detail. Superbly played by Brian Doherty, Dog is one of Jim Nolan’s most interesting characters. Utterly self-centred and self-obsessed, Dog is a liar, a bully and a racist driven by his own self-interest with no soft centre. As the booze takes hold, Dog’s viciousness is revealed; forcing the others to stay and drink against their wishes. His insults become a tirade of abuse against all-comers and gradual revelations fan the flames of the details of his friend’s suicide.

Jim Nolan writes interesting characters that are all different. And they’ve all got their own stories to tell. We leave the theatre having felt that we know even the offstage characters like  Sinner, Dog’s foolish father, Kel’s naïve mother, Dettsie’s obsessive husband, Charley’s dead husband and lollipop-man Zorro’s boss at Waterpark College. There are so many dramatic hooks that we haven’t time to lose interest. The gradual revelations of the onstage characters is the dramatic hook that keeps us interested all night.

Performances are compelling. Brian Doherty’s Dog is a towering, bullying, nasty presence that you would run a mile to avoid. Michael Quinlan as Scabs is a tortured, tormented friend who will not leave the reason for his friend’s death go. Keith Dunphy’s gentle underplayed Zorro is a delight. Keith is so laid back you could peel him off the wallpaper and his comic timing is impeccable. Greta Rochford’s Dettsie is an earthy, worldly-wise wife who wants more from life and now that her kids are gone and her husband is a buyer for Shaws up in Portlaoise, it’s happy days. Jenni Ledwell’s Charley brings a sense of ladylike calm and thoughtful curiosity to the often-frenzied conversations, while Neil Dett’s Kel is a maelstrom of contradictory emotions as he is trapped between loyalty to his friends and his horror at his treatment by three of them.

One of the delights of The Red Iron is the comfort that the lyricism of Nolan’s language, rooted in the city, brings. A reflective Zorro, incarcerated in Ferryhouse Industrial School as a 12-year-old for setting fire to his classroom, draws on local street names in a quasi-religious litany of… “Morrisson’s Rd, Mount Sion Ave., Monastery St., Griffith Place, Doyle St., Shortcourse and home to Buttermilk Lane to my Grandad”… in one of the most moving moments in the play.

‘The Red Iron’ brings us back to the great days of Red Kettle and reminds us all of its loss to the city. Well done to Jim Nolan and all those who brought The Red Iron to us.