“GOOD writing excites me, and makes life worth living,” said Harold Pinter. Were the estimable Mr Pinter still among us and inclined to frequent O’Connell Street, one suspects he’d have beaten a track to Garter Lane to ponder and savour Jim Nolan’s ‘The Red Iron’.

As the show’s promotional material made abundantly clear, ‘The Red Iron’ is a “new play for Waterford”. Indeed, there may never have been so intrinsically Waterfordian a drama written or staged heretofore.

The nuances of geography and dialect, so wonderfully vocalised by the play’s stellar cast, will strongly resonate with punters from the ‘Top of the Town,’ Larchville, Lisduggan, St John’s Park and the web of streets around Walsh Park.

The gallows humour, the power of a strategically positioned expletive and framing the fallout catalysed by personal loss on a day many Déise folk can readily recall are all plotted expertly by Jim Nolan. And while there’s no surprise that Jim’s storytelling gift remains resolutely evocative and impactful, taking such a talent for granted is a trap his many admirers are never likely to fall into.

Competency may be the first bar all artists strive to clear, but maintaining consistency is the target all artists aspire to. And that’s no mean feat.

What constitutes success can be somewhat crudely measured through ticket, book or album sales. Plenty of questionable output has made a great deal of money over the years without holding either contemporary or longstanding critical merit. But work that remains relevant long after its initial escape from a writer’s study is, for me, the greatest legacy any writer yearns for.

The theatre-going people of Waterford will not wait until a plaque or statue is unveiled in his honour to let Jim Nolan know how admired, respected and loved he is. He is of us. He is among us. He writes about us and it’s something that no-one else in his lifetime has done with such wit, grace and heart.

And his creative water mark, as ‘The Red Iron’ has served to underline, remains welcomingly high. That level of consistency is something anyone who sits before a laptop yearns for, whether you’re scripting a play, writing a book or filing an ‘on the whistle’ match report on a damp Sunday on Keane’s Road.

Elevating characters from page to stage while making such characters fully formed, utterly believable and implanting within each of them dialogue transmitted as spontaneous conversation, is a rare gift.

Assembling a cast capable of breathing life into such characters while never losing sight of how ‘lived-in’ and occasionally worn out most of us veer towards during middle age, is no easy feat either.

The theatrical muscle memory of Brian Doherty, Michael Quinlan, Keith Dunphy, Greta Rochford, Jenni Ledwell and Neil Ditt added layers of quality to Jim Nolan’s stunning script and subtle direction. Each of them should draw enormous pride from how well they sold what Jim assembled.

And thanks to the brilliant recreation of the Red Iron Bridge, designed by Dermot Quinn and constructed by Jim Whelan, the players could not have wished for a worthier performance platform. Talk about a literal support act!

When a work takes its audience through the full emotional spectrum, ranging from belly laughs to deathly silence, a playwright has clearly done his job well.

In the case of ‘The Red Iron’, Jim Nolan did so brilliantly, and the hearty handshakes extended in his direction both in the theatre on opening night and in Tom Maher’s afterwards, were thoroughly earned.

What particularly hit home with me, and something I suspect will ring true with most audience goers, is that I saw elements of people I’ve known in each of the play’s six characters.

We all know the ‘walking contradiction’, the fella with a heart of gold who’d also go through you for a shortcut. We all know the schoolmate who went ‘out foreign’ and made a real go of their lives as well as the classmate or two you’ve not seen or heard anything of since the Debs.

We all know the type who has been in bother with the law back in the day but has done his best to stay out of trouble since. We all know someone for whom life became problematic to the point where it became an irreconcilable and irreversible struggle. And we all know how funerals and all that go with such trying days tend to bring out the best and worst of human extremities. But we can’t all write powerful plays about such people and such occasions. Thankfully, Jim Nolan can.

Of the many contributions made in ‘The Red Iron’ programme, TV Honan’s comments, referencing ‘The Gods Are Angry, Miss Kerr’, one of Jim’s earliest works, proved particularly poignant.

“In the post-show bustle of Flaggy Lane the writer was politely evasive when a prominent city entertainer suggested: ‘You should write one about the Paper Mill’s or Denny’s next.’ Little did anybody know then there would not be another new Red Kettle play by Jim Nolan set in Waterford until now. It has been a gap as large as that in the bridge itself, but tonight Red Iron celebrates and remains true to its roots.”

After last Tuesday’s performance, I brought the dog out for a walk. The sky was clear and the moon was glowingly vivid. In my mind’s eye, while the vapours of my breath escaped like steam from an old engine spout, I was back in the Garter Lane auditorium, relishing the dialogue, savouring the set and enjoying being among my own. Shared experiences remain special and last Tuesday night was very special.

Jim Nolan’s body of work has surely added meaning to his own life. It’s also given we who are born here, work here, exist here and are emotionally invested in this city a greater sense of who we are. And I for one am grateful for that. Bravo, Jim. Keep ‘em coming. 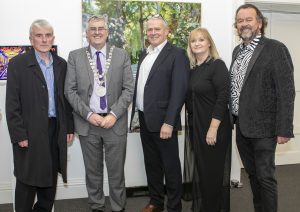 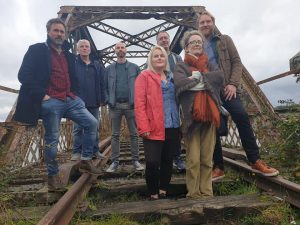 The cast of ‘The Red Iron’ pictured with Writer/Director Jim Nolan. 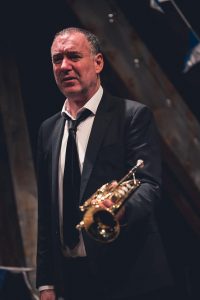 Brian Doherty, who starred as ‘Dog’ in ‘The Red Iron’.