Gateway to the technological South-East 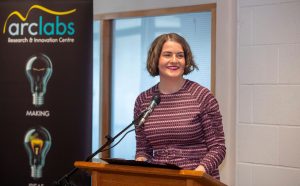 INNOVATIVE opportunities have doubled in the South-East, owing entirely to the 1,000m² expansion of Arclabs Research and Innovation Centre, funded by Enterprise Ireland. The new €2.5m expansion to the incubation facilities in Arclabs was officially opened last Friday by a panel comprising of Minister of State John Halligan and Mayor of Waterford City and County Cllr John Pratt, Regional Director of Enterprise Ireland John Corkery and Professor Willie Donnelly, President of WIT.

Kathryn Kiely, member of the original Arclabs Advisory Board has been heavily involved in the Arclabs project from the beginning and credits the expansion as “doubling our capacity to attract entrepreneurs and start-ups to Waterford and the South-East.”

An innovative hub like Arclabs, according to Dr Joseph Ryan, CEO of the Technological Higher Education Association, “is hugely important. It is emblematic of what the whole tech sector is about. When academia works so closely with enterprise, that’s where you have a catalyst for driving the economy.”

With the original building established in 2005, Dr Ryan credits Arclabs as being ahead of its time. “It is a pioneering enterprise, it is also looking to the future to what the technological university system is about.”

Arclabs is co-located with TSSG and the Centre for Enterprise Development and Regional Economy in Carriganore, allowing vital links to be established between new start-up companies and access to research and funding opportunities. These opportunities are possible because in a centre like Arclabs where “creative conversations allow new ideas to emerge”, a cup of coffee in the corridor can open up a new avenue of possibility for a start-up or established company.

Attending the event were former Arclabs managers Tom Corcoran and Ciarán Cullen.  Current manager Dr Aisling O’Neill addressed the substantial gathering with pride as she acknowledged her historical association with Arclabs, from research student, to PHD candidate, to stand today as Arclabs manager as of January 2019. Arclabs offers a unique student experience where research is coupled with enterprise engines such as NDRC and the New Frontiers programme.

The Art at Arclabs initiative was introduced this year by Dr O’Neill and has featured local artists such as Lisa Keane, Stephanie Louise Furlong and the current artist on display, Bettina Norton. Displaying art brings a holistic element to a technological hub, allowing Arclabs to lead the way as an innovative ecosystem with an atmosphere conducive to creative thought.

Cllr John Pratt emphasised the vision for Waterford, which is “to make Waterford the best possible place for all those who wish to live, visit, work or invest here.” He applauds the efforts of Arclabs in continuing to be an invaluable component in efforts to achieve that goal. This was echoed by Minister Halligan who vehemently stated, “There will be an election in the coming months, you have to make sure that we invest in innovation, research and development. When TDs come to your door, you need to ask what will be done so that we can have more PHD students coming out of our universities. The driving force behind any future economy will be how much we invest in innovation, research and development.” Ireland currently sits in second place for scientific research and ninth place for innovation worldwide.

President of WIT Professor Willie Donnelly concluded the event with a poignant note, “A whole team of visionaries took my crazy ideas and put a shape around them.” Consequently, young people no longer need to leave the area for research and employment opportunities in the tech sector. Proudly, Professor Donnelly named Arclabs as the technological gateway and the catalyst for the development for the next generation of start-ups.