AFTER almost 40 years in business, John Martin Jewellers is closing its doors on Waterford’s Barronstrand Street.

Speaking to the Waterford News & Star as its Closing Down Sale got underway, proprietor Dolores Hennebry said she’d been overwhelmed by the good wishes she and her staff has received since the news of the closure broke.

“I’m 32 years in John Martin Jewellers and since I took over the business myself, this is my 27th Christmas behind the counter,” said Dolores, a native of Portlaw.

“And since we made the announcement, between people coming in to wish me well and the messages on social media, it’s just blown me away. It’s lovely to see so many people saying how much they loved coming into us here over the years; we’ve had messages from Boston and Australia and I appreciate them all. The reaction has been genuinely phenomenal.”

Dolores continued: “This remains a very good business but my (two) daughters, who have been a fantastic support to me all the years I’ve been here, weren’t interested in taking it on themselves. Health was a consideration for me too so taking both of those things into account, it just felt like the time had come. I’ve put a lot of years into the business and I’ve absolutely loved it but you know what they say about all good things. It’s a very specified type of work but it’s work I’ve really, really enjoyed. It’s been very good to me but it’s time to move on to the next chapter now.”

So what got Dolores behind the counter in the first place? “I was left go in Motherneeds after I came home from my honeymoon and John Martin Jewellers asked me would I come in at Christmas to cover maternity leave. Sure I sold all around me and on the back of that he offered me a job! Then in 1993, I bought him out; interest rates were 18 per cent at the time, it was a harder business then but we built up a beautiful customer base with the most loyal following. And the staff we’ve had here over the years, I couldn’t have asked for better. We’re still all friends, we regularly meet up for coffee and it’s always been like a family in here.”

As for her many customers, a beaming Dolores said: “The loyalty we’ve had from generations of families has really been something else. Waterford has the nicest people and we’ve all had so many lovely conversations with customers across the counter here. There’s a genuine warmth and decency in Waterford people, I think we all know that’s the case but we probably don’t say it enough. We’ve developed so many lovely relationships with customers over the years – I’ve made many friends standing here and when we were in George’s Court. We always had the feeling we were ‘well got’ but the kindness that’s been extended over the past few days means so much to me. And I’ll always treasure it.”

Dolores’s sister, TD Mary Butler, extended best wishes via her own Facebook page, writing: “Happy retirement to my sister Dolores and my boss for 10 years. I spent many happy years behind the counter of John Martin’s with Carolyn White, Joanne Tubbritt, Kate Hennebry, Ann Bailey, Gina Quilty and Helen Walsh. Dolores is a fantastic entrepreneur and business woman that successfully grew and expanded her business, stocking top quality jewellery from all over Europe, always ahead of trends and fashion, and a great supporter of local businesses. Enjoy your retirement Dolores, well deserved – plenty of time for canvassing in the New Year!”

Customer Paul Simpson captured the mood of many in his own Facebook tribute to Dolores and her staff. “This is a very sad day for Waterford. Bought our wedding rings here… The staff always gave great advice. This jewellers was a city treasure. Thanks for all those years putting the customer first. Very sad indeed.”

The level of goodwill towards the business was underlined by an online competition we ran last week for a John Martin Jewellers gift voucher worth €200, which drew a staggering 3500 entries. A delighted Joan Cheasty of Kilmeaden emerged as our winner and received her prize in our offices on Thursday morning last. 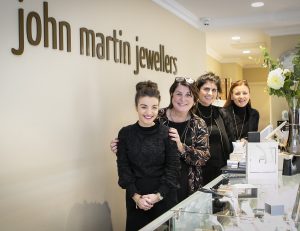 End of an era: Joanne Tubbritt, Dolores Hennebry (proprietor), daughter Kate Hennebry and Carolyn White pictured behind the counter of John Martin Jewellers, which is to close after almost 40 years in business. Photos: Joe Evans 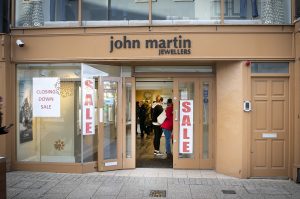 The popular store has occupied a prime position on Barronstrand Street for four years, having been previously based in George’s Court. 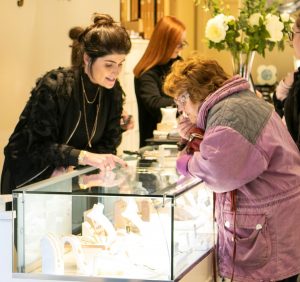 The closing down sale has seen customers old and new flocking to check out the store’s wares.