Long winter as Gunners’ short game gets stuck in the mud 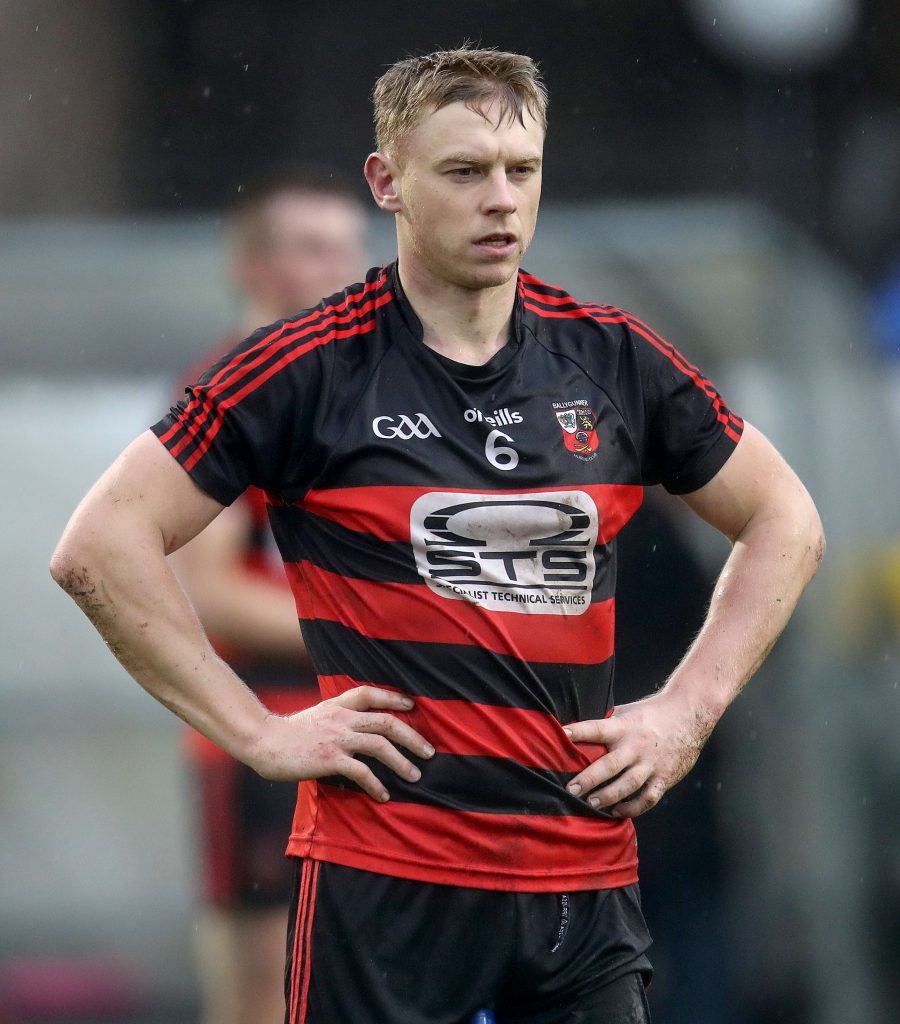 A gutted Philip Mahony at the end of the game in Pairc Ui Rinn.

When rain was forecast earlier in the week, Borris-Ileigh wanted it to pour.
Their direct hurling and their flooding of the middle third better suited the wet and wintry conditions on Leeside. The big Borris players both in size and reputation came out to play as Ballygunner’s short game got stuck in the mud.

Borris bombardment
The make-up of the Borris team meant that they could go from back to front quicker than their opponents.
The Kenny brothers (Niall and Conor) and Jerry Kelly could all contest the high balls that dropped on top of them. That aerial bombardment pressurised Philip Mahony just as it did against De La Salle. In the second half, the sliotar travelled further as the wind picked up. A Kelly point and a Niall Kenny goal chance came off that route one approach late on. Conor Kenny also missed a point opportunity in front of goal.
Ballygunner didn’t have that option. Only Barry O’Sullivan fits the bill as a bear in the square. So, when they fell behind in the final quarter, for the first time this season, they stuck to their guns and stuck to the short game that got them this far. The goal was a product of that philosophy. Stephen O’Keeffe to Paddy Leavy to Dessie Hutchinson to the unmarked Barry O’Sullivan.
It wasn’t always so slick. As the weather worsened so too did the accuracy. Balls slipped off the stick and off the hand into the maroon and white wall. Take Philip Mahony’s stray ball towards the sideline that resulted in Brendan Maher’s lead point. Or Pauric Mahony’s free outside the 65, when they were 10-7 up, that skidded off the hurl. That would have made it a two-score game for the first time.
Perhaps the most damning statistic is that Ballygunner only managed one shot at goal in the last ten minutes: Mikey Mahony’s 55th minute point attempt that dropped short into James McCormack. They couldn’t work the ball up into scoreable positions.

Kelly’s heroes
Jerry Kelly was like Gerry McInerney with the white boots. He summed up the no frills approach that the underdogs took into this final.
The strong and stocky full forward threw himself into everything. At the start of the second half, a fair and square shoulder knocked Paddy Leavy to the ground.
He was hard to handle under the high ball. With Borris a point down, he won a dirty ball in front of goal, fended off three defenders and levelled the match. When he lost his hurley in injury time, he booted the ball into the corner and killed the clock.

Mighty Maher
Sunday was St Brendan’s day.
The point in front of the stand, when he burst through five players to fire them into the lead, raised the roof. Twice in injury time, Maher cleared the ball and jumped for joy when he was awarded a free. The undisputed man of the match nailed five of his seven second half shots.
Borris played a risky strategy. Maher followed Pauric Mahony out the field, leaving their full backs to deal with the twin threat of Dessie Hutchinson and Peter Hogan. They got the ultimate reward. Dan McCormack sat as a deep lying midfielder and this freed up his Tipperary mate to attack the ball. He who dares wins.

What ifs
What ifs always follow one-point defeats.
What if Peter Hogan stayed on the field? Without him, Dessie Hutchinson was the only Ballygunner forward able to hold up the ball. When Hogan pumped the legs, he found gaps in the Borris back line. The Gunners nearly got two goals from those solo runs but settled for two points instead from Pauric Mahony frees. The second was nearly a penalty as Hogan was pulled down just outside the box. Substitutes Conor Power and JJ Hutchinson didn’t get any shots off in the last twenty after he went off injured.
What if Johnny Murphy didn’t blow up Shane O’Sullivan and Paddy Leavy in possession? O’Sullivan was penalised for fouling the ball when Stephen O’Keeffe found him in oceans of space. The replay shows that he released the ball onto the hurl. Four minutes from the end, Leavy was penalised for overcarrying when Borris sub Jack Hogan appeared to pull at his arm. Maher pointed both frees.
In the second half, it was nearly a disadvantage to have the ball in hand. Borris forward James Devaney was penalised twice early in the second half along with Jerry Kelly.

Great white hope
The most talked about player on Sunday was Brendan Maher but Dessie Hutchinson was a close second. The man in the white helmet is Waterford’s great white hope for 2020.
Three points from play off an All-Ireland winning defender in Paddy Stapleton is no mean feat. His third was the pick of them after he was shepherded towards the sideline.
The 22 year old was involved in all three second half scores. He put Peter Hogan through on goal, picked out Barry O’Sullivan and set up Conor Sheahan. He also had an uncharacteristic wide of his own and passed to O’Sullivan for a wide.
Hutchinson harvested 4-27 during this campaign, including 1-10 in the Munster championship. All from play.