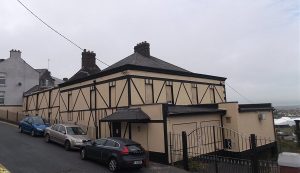 The site of the former Tramore hotel, Strand Street.

THE site of the former Tramore Hotel is set to feature a two-and-a-half storey apartment block and one dwelling house. Conditional planning has been awarded for the demolition of the hotel and all associated outbuildings. The hotel, which was the subject of several fires, the most recent in August 2018, was sold at auction in May 2018 for €175,000.

An application was made by Mr Josh Linton to redevelop the site as a residential block, with a shared entrance off Strand Street. The building as it stands is set to be demolished and both the apartment block and the detached house will be a fully serviced two-and-a-half storey development.

At one point, it was hoped that the new owner would lease the property to the local authorities as a possible car-park, as part of the long-term plan for the town. 10 objections were submitted to the planning department, including local businesses and residents.