Saved from drowning by Tramore natives

TWO Tramore lifesavers are among those to be presented with the ‘Seiko Just in Time Rescue Award’ in appreciation of their heroic actions for saving people from drowning in the sea.

In total 16 lives were saved from drowning by rescuers throughout the year.

Matthew Sills, a former lifeguard from Tramore, who is currently an emergency medicine doctor in Crumlin Hospital, and 16-year-old surfer, lifesaver and Ardscoil na Mara student Tom Breen are among the rescuers, who will receive recognition at Water Safety Ireland’s National Annual Awards Ceremony at UCD, Dublin this evening.

Home for a weekend in Tramore in August, Matthew was driving along the prom early one morning when he noticed a group of panicked bystanders attempting to throw a ring buoy into the sea.

Two people; a man and woman, were being pushed against the Prom wall by the high tide and large swell. One was attempting to help the other, who appeared to be in significant difficulty.

Quick-thinking Matthew grabbed a rescue tube from his car, and ran to the slip, diving into the water fully clothed before swimming out to the incident.

Matthew strapped the rescue tube around the woman, which allowed the male to begin swimming back to dry land with support. Matthew then assisted the woman to safety and out of the cold water. If it wasn’t for the brave and decisive thinking of Matthew, the incident could have had a tragic outcome.

Meanwhile, Tom was away in Lahinch, Co Clare at a surfing competition on September 14, when he heard shouting coming from the sea. Tom could see two men in the distance, who were obviously struggling. Without hesitation, Tom grabbed his surf board, sprinted to the water’s edge and paddled directly out to the two men, using a rip current to his assistance, so he could arrive as fast as possible.

One of the men was in extreme distress and reaching the point of exhaustion. Tom pulled this man up on to his surfboard and carefully paddled him to safety. The second man swam alongside Tom, who continued to guide him back to shore. Once safely on shore the exhausted man began moving but was hypothermic and in shock. Tom’s swift and decisive action resulted in this man’s survival.

Tom has subsequently proven his athletic prowess, going on to represent Ireland at the European Surf Lifesaving Championship in October 2019, where he won a European Silver Medal in the board rescue event.

Michael Ring TD, Minister for Rural & Community Development said, “Without their bravery, quick thinking and selflessness, the outcomes could have been very different.

“I would like to commend the efforts of Water Safety Ireland volunteers who devote their time and contribute to the year on year trend of reduced drownings.”

Martin O’ Sullivan, Chairman of Water Safety Ireland, added, “I would ask all adults to make themselves more aware of the dangers of drowning. Tragedy can strike in seconds but with the right knowledge, skills and attitudes everyone can avoid the hazards and take responsibility for their own safety. Encourage your family, friends and colleagues to read Water Safety Ireland’s guidelines at www.iws.ie so they can enjoy Ireland’s waterways safely.” 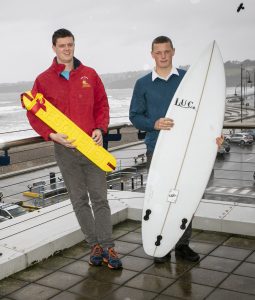