The Book Nook with Dymphna Nugent 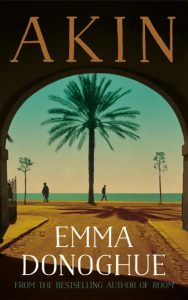 IT’S hard to read a new novel by Emma Donoghue and not make comparisons to the success of Room, uncomfortable masterpiece that it was. Akin is described as “her first contemporary novel since Room”, which creates an unavoidable link for the reader as they progress through it. That link unfortunately puts a pressure and an expectation that it just never lives up to.

Noah is “an old man packing his bags” at seventy-nine years of age, preparing to return home to the French Riviera, to his childhood home of Nice before his eightieth birthday. Unexpectedly he is asked to care temporarily for his late nephew’s son, a boy hailing from a home of drugs and incarcerated parents by all accounts.

His initial attempts to care for Michael interested me, as I drew comparisons between the older and the younger generation in my own life. Such an unexpected responsibility at such a late stage of life challenges Noah’s sense of security and authority as an adult but repetition of excessive cursing by the boy and failed disciplinary measures by Noah makes this whole situation uncomfortable to read. Furthermore endless refills of Coke, despite remonstrances from Noah leave the entire attempt at relationship development flat.

Noah distances himself from his late parents by calling them Margot and Marc, his ties to the past hinted at but underdeveloped. Noah himself is unfleshed out and speaks with a wan voice. He tries to connect with Michael by reaching across the generational gap to discuss technology and neighbourhoods but it reads as an upper middle class man saddled with a troublemaking boy from a bad part of town.

This bad part of town was supported by the apparent drug history of his father and mother, the death of his father due to drugs and his place in a school where he already had a scant attendance record. Yet, the presence of the stern guiding hand of his late grandmother ensured he attended church service and didn’t curse, and the reader would assume that school attendance would have been part of the life lessons imparted from grandmother to grandson, yet apparently not.

Photographs and memories dominate the plot, shining a light on the importance of our ties to the past and having a tether, something to keep us grounded and part of a larger connection. The Pére Sonne photograph collection were kept by Noah’s mother, Margot, and passed on, but until the end, the entire presence of them is a little tiresome and not at all in keeping with the generational contrast, the endless glasses of Coke and the cheeky profanities.

It is unfair to deal with this as anything less than a standalone piece but given the high profile of Emma Donoghue, I think her success with Room lay with the simplicity of the plot and how the reality of the situation resonated with readers. Akin was busy, there were so many different threads and all of them feel flat, with no room to breathe or grow. Donoghue is a skilled writer but I think going back to a more basic plot will lend strength to what are always decent plot lines.

Well Said: Healing with Tea since 2015