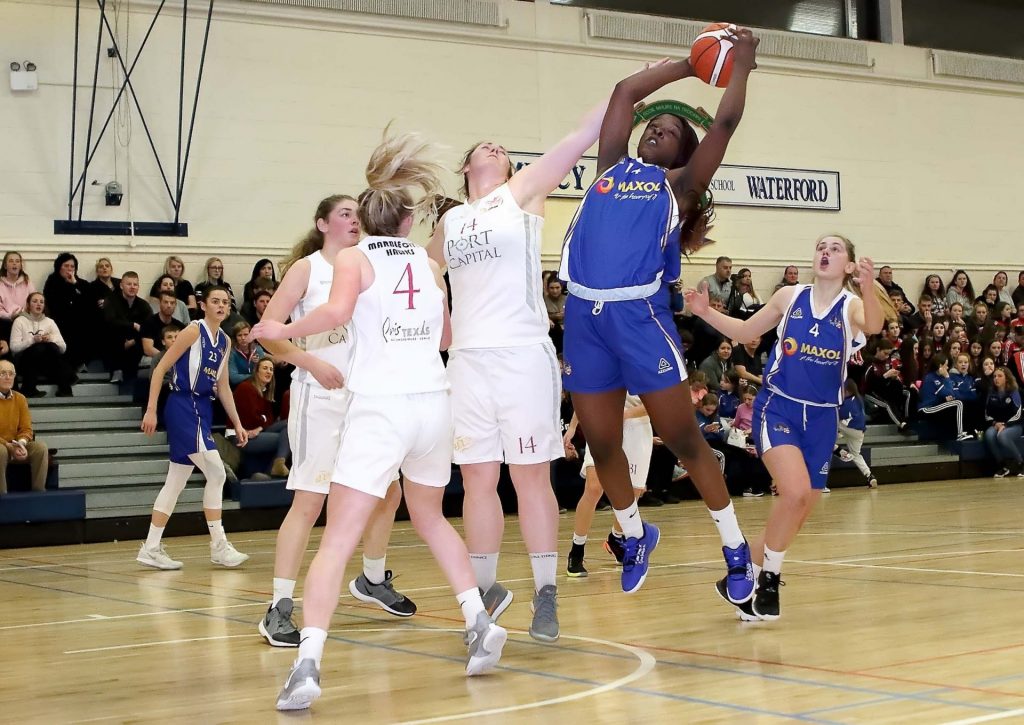 Waterford Wildcats recorded two vital wins over their Kilkenny neighbours over the past weekend when their U-18 team proved too good for the Kilkenny Stars in the U-18 National Cup quarter final in the Watershed arena Kilkenny on Friday night. Then on Saturday night in front of a packed Mercy Sports Hall Wildcats Super League team came out best winning by 73 points to 43 over Marble City Hawks. These past two weeks have been exciting for all involved in Wildcats as they had similar success the previous week when they beat Glanmire of Cork to progress to the U-20 National Cup semi final and the Super League team recorded a massive away win over reigning champions Liffey Celtics.

Great occasion
Last Friday’s U-18 Cup game hosted in the Watershed arena Kilkenny was a rather special occasion for Kilkenny as it was the first time they reached the Cup quarter final at A level. Credit to all concerned in our neighbouring county for the way they promoted the event as there wasn’t a spare seat available in the arena. Prior to tip off there was reason why Wildcats might be nervous as one could cut the atmosphere with a knife. However the large numbers who travelled from Waterford let themselves be heard and their team gave them plenty to shout about with some quality basketball from a excellent team performance. Wildcats proved they have reason to fancy their chances come semi final time with a 44 point victory over Kilkenny Stars.

Super League
Kilkenny’s Marble City Hawks have found the going tough in the top league this season but in their last game which was home to Glanmire they were in touch of victory right up to the final minutes. That performance gave them the right to think they might pull off a surprise win over Wildcats and again they hung in right up to the final quarter before Wildcats pulled away for a comfortable victory which keeps them in the top half of the league table.
Wildcats led 19-13 after the first quarter and 31-22 at the break thanks to many fine scores from Sinead Deegan, Helena Rohan and Jazz Walker. But it was the performance of centre Steph O’Shea who caught the eye most as she gave a dazzling performance especially in the crucial second period to keep the visitors at bay.
Many more fine scores from Wildcats were well matched by the Hawks who are most fortunate to have the basketball dynamo that is American Katie Fox in their team. The former Wildcat must be running on diesel as she covered every square inch of the court turning in a mesmerising performance which was the main reason Hawks kept in touch 46-36 as the game entered the final 10 minutes. Just then Wildcats put their foot on the gas and put sizeable distance between the sides. For a period it was the Abby Flynn and Debbie Ogayemi show as the two 18 year olds cut the Kilkenny defence apart creating and finishing many fine scores.
Meanwhile Jazz Walker was busy as she was all game chipping in a fine contribution which gave her a game high 16 points. Indeed all Wildcats player scored on the night with the final basket coming from wildcats 17 year old Kate Hickey recording her first score in the Super League and if her performance in the U-18 cup game is anything to go by she can look forward to playing a big part in Wildcats continued quest for national silverware.

Super League Cup
This coming Sunday in the UCC Arena Cork Waterford Wildcats take on Glanmire in the Super Cup quarter final. This will be a tough ask for the Waterford side away from home. The sides met recently in the league with victory going to the Cork outfit by 10 points. However Wildcats should have learned from that game as they were defensively asleep in the early stages allowing Glanmire to open up a 20 point gap. Credit to Wildcats they battled on and had the difference down to just five points with four minutes to play but two late three pointers from the hosts put the game beyond Wildcats. This time round you can bet Wildcats’ coaches Jillian Hayes and Trish Nolan will have their team well prepared for what should be a cracking cup quarter final with the tip off at 2pm.
The news on Wildcats centre Cathy Kavanagh is that she is in light training but it may be a few weeks before she is ready for court time.