Well Said! Deisemen grateful for a ‘home away from home’

THE INAUGURAL Waterford Men’s Shed Showcase, held at the Butler Centre on Wednesday last, drew members from across the city and county’s growing number of sheds.

While the rain fell heavily outside, the goodwill and positivity indoors was abundant, as shed members showed off their respective wares while chatting over tea.

From car repair to ‘buddy benches’, from furniture restoration to artwork, the level of creativity on display last Wednesday is testament to what the movement has made possible across the island over the past decade.

The words of the late Noel Power, a member of the Waterford Estuary Men’s Shed who died on October 8, proved particularly resonant for all in attendance, underlining the importance of collegiality and finding a new level of self-worth in retirement.

Estuary Shed Chairman John Lyons said that John, “like many of us, was reluctant to join the Men’s Shed until he got a very gentle push from his wife Mona, who is here today with her family from Limerick. Noel eventually came and joined us and, after several months with the shed he took the unusual step of putting pen to paper and writing down his thoughts on the activities of the shed.”

Titled ‘A Tribute to the Men’s Shed’, Noel wrote: “When I heard that the Men’s Shed was being set up in Passage East, I was somewhat sceptical and doubtful of whether I would attend and join up as it was something new and different to me. I was retired for 10 years (from An Garda Síochána) and I was open to challenge. I have always kept busy, doing gardening and looking after the local playschool in Crooke. I knew there was something missing but I could just not put my finger on it.”

He continued: “The companionship of colleagues at work was missing after 37 years. You just can’t shut off. My wife persuaded me to go down and join up and I am glad I took her advice. The first day, I imagined what the other members would be like. Would I know anyone? Would I fit in? I only recognised three people but I shouldn’t have worried as I was made feel welcome. Washing, cleaning and painting took up most of my time but the shed turned out to be the splendid building it is today. During this time, a bond emerged, uniting the Men’s Shed together – a big, close family. I have no basic skills but however old you are, you can still learn new skills and trades in time. An old dog can be taught new tricks. We started off making kindling for the elderly, fixed handles on brushes, repaired chairs, etc. The church cabinet was fixed, the microphone stand repaired and uplifted; small things, but vital for the community. We then made buddy benches for the schools, wheelbarrows and birdfeeders. We all became skilled in achieving the results that we set out to do. It may have taken 12 months to get a proper wedge for the bow of the boats but with help and advice from other colleagues, these angles were achieved – problems solved and great satisfaction in getting it right at last. There is no negativity in the shed, it is all positive and we achieved what we set out to do.”

Noel’s essay referenced two boxes at the door of the shed. “The first contains negativity, airs and graces, loneliness and isolation. The second is filled with positivity, belief, assurances, friendliness and companionship. Bury the first box outside the door and throw it in the river. Pick up the second box and walk into the shed. You are now part of a close family of wonderful people and friends. When members join the shed, they should be asked to look up at the sign over the door. It clearly says ‘Waterford Estuary Men’s Shed’. There is no ‘I’, but a huge ‘WE’. I don’t mean that members should lose their identity, character or personality but the motto should be: ‘Let us forget about the ‘I’ and embrace the ‘WE’ with open arms’. However we feel in the morning when we enter the shed, we carry a new shiny box with us every day to uplift the spirit and the souls of everyone. That’s how it should be: a second home from home.”

According to Barry Sheridan, Chief Executive of the Irish Men’s Sheds Association: “You can’t underestimate what’s happening through the Men’s Sheds in Waterford and right across this island. It’s only eight or nine years ago but back then, Men’s Sheds weren’t even heard of in Ireland so to go from having zero sheds to around 460 today across this island really is something. That’s 460 communities (and 12,000 men approximately) that are benefitting from having a shed in their locality.”

Men’s Sheds in Waterford are also keen to break new ground in terms of their in-house activities, as Dylan Butler explained.

“We’re restoring old cars, Class 6 vintage as well as bikes, anything really that has a motor,” he said regarding their work, which is based alongside Waterford Airport.

“We’ve worked on old Toyotas, there’s old Kawasaki and old Honda bikes in there at the minute and a couple of BMWs. We bring the car in and we do all the nuts and bolts stuff from the top down. We’ll see if there’s any panel work that needs to be done – if there is we’ll cut out the rust patches and we’ll weld it in – and that’s where my background in fabrication comes in handy. Then there’s another chap who’s into panel beating, Damon Crowley, and he’s very handy at that. Now none of us are panel beaters so we’re learning as we go along.”

Dylan, a car culture aficionado, continued: “So we go through the engine, rebuild it and tear it down – there’s a block there behind me on display which is being re-done. We put the car back together, we get it going and then we bring them to a few shows. It’s very enjoyable work and we all get something out of it. A big, massive thing for me has been depression so the shed has given me somewhere to go where I can think, where I can work and I was happy doing that work because I was with other people who were interested in what I was into as well. There’s a lot to it and it gives you something to work for. As a Men’s Shed, we got up and running last January and it’s been absolutely brilliant. It’s going places and we’d like to see it get a lot bigger. That’s the plan.”

“In sheds in the past we might have had once-off jobs in terms of re-doing tractors but this is the first time that a shed has opened up another avenue. The construction of a car is a fully new thing for us, to have 13 to 14 lads in there working on a different model of shed. The lads obviously have a passion for this and it’s great to see them getting so much out of it.”

He continued: “It just shows that there is a space needed for men. It’s very strong as is, it will get stronger and the structure is there to support existing sheds and to help create further sheds right across Waterford. We’re 450-odd sheds in now, which is incredible and a day like this is when we really get a kick out of what we do and what we’re committed to. The workmanship is fantastic, the hidden talent that’s emerged is unbelievable and, perhaps most importantly of all, the company that men can be for each other has truly come to the fore.” 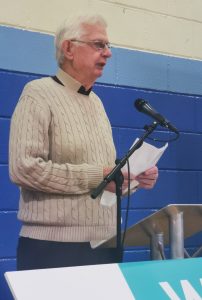 John Lyons of the Waterford Estuary Men’s Shed, who read a touching essay written by the late Noel Power about his shed experience at the Waterford Men’s Shed Showcase at the Butler Centre on Wednesday last. 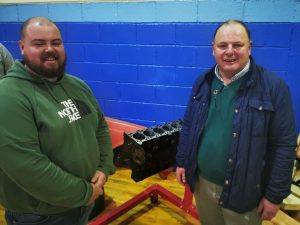 Dylan Butler (involved in car restoration with the Shed) and Eoin Martin, Chair of the Irish Men’s Shed Association, pictured at the Butler Centre. 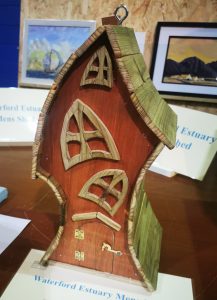 A Fairy House, which featured among the Waterford Estuary Men’s Shed’s display on Wednesday last.