The bother of a budget 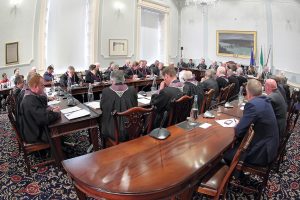 THIS evening (Nov 29), the 32 councillors of Waterford City & County will meet in City Hall to discuss, and hopefully pass a working budget for next year. A draft has been prepared by Waterford Chief Executive Michael Walsh and his team, and the Waterford News & Star understands that it contains a 5% increase in commercial rates and over €700k of cuts across the board in areas such as festivals and roads management.

It was revealed in recent weeks that due to rates re-evaluations, Waterford would be down €3.3m this year, due to changes in the way Irish Water pays for its assets. When that news broke, budget cuts seemed inevitable, and everyone has been bracing themselves for the worst. However, last week, Minister for Housing, Planning and Local Government Eoghan Murphy told his Fine Gael colleagues in Waterford that he would be giving the Council a one off payment of €2m to help with the passing of a budget.

Speaking about the €2m, Fine Gael Councillor John Cummins said that it “puts us in a better position than we were in a few weeks ago”.

“As with every budget, challenges always arise, such as the €1.2 million shortfall we faced a couple of years ago due to another revaluation of global utilities, in that case telecommunications,” Cllr Cummins said. “The current shortfall, while challenging, is now commensurate with that figure following our increased subvention of €2 million and I am sure there will be a vast array of opinions on how that gap should be closed.”

“The Government’s offer blatantly ignores the fact that this situation arises because of decisions taken by the confidence and supply government regarding Irish Water, and it doesn’t undo the massive cut to the Council’s budget,” Cllr McGuinness said. “It is a once-off measure and doesn’t take into account the fact that Government are imposing a year-on-year cut of €3.3m on Waterford. The onus for solving this crisis is on the confidence and supply Government. Sinn Féin will stand up for the people of Waterford City and County and we will not tolerate a situation where our communities and small and medium businesses are treated as collateral damage of short-sighted and damaging Government decisions.”

So, the battle lines have been drawn and the budget will need to be passed by a majority on Friday. Cllr McGuinness, on behalf of Sinn Fein, has publicly stated that Sinn Fein will stand up for business and communities, which essentially means that they won’t be voting for Michael Walsh’s budget. This creates a dilemma. Do they come up with a budget of their own, which finds another way of making up the shortfall, or do they simply refuse to vote for the budget at all, stick to their guns, and let Fianna Fail and Fine Gael make the difficult decision to vote for the harsh cuts and even harsher rates increases?

One thing is for sure, someone is going to have to vote for the budget, otherwise Minister Eoghan Murphy will step in and sack all 32 of them. The Waterford News & Star contacted his Department this week to find out exactly what will happen if the council can’t agree on the budget this week. They issued the following reply:

“A balanced budget must be adopted within 14 days of the first meeting. There is no statutory provision for the council to seek an extension to that budget period. In such a case where the budget meeting has closed and the members of the local authority have not adopted a budget, the Minister, by order, can remove from office the members of a local authority if and whenever a local authority refuses or wilfully neglects to comply with any other express requirement which is imposed on it by or under any enactment included in the Local Government Act 2001. In such circumstances, one or more Commissioners shall be installed to adopt a budget and carry out other reserved functions until such time as fresh elections to the local authority could take place (under section 217 of the 2001 Act).”