BROWN’S LANE may not re-open to traffic until the New Year, Metropolitan Councillors were told at their November meeting at City Hall.

Replying to a query from Cllr Eddie Mulligan (FF), District Engineer Conor O’Neill said that the widened road, to facilitate traffic to and from the proposed Michael Street Shopping Centre, was initially due to be opened before Christmas.

“But from what I understand, they want everything to be finished before they’re opening that section so it may be after Christmas before that is completed but I’ll give you a further update on that one at the next meeting.”

A worker on the Brown’s Lane site told this newspaper: “You wouldn’t believe the amount of rubbish we took out from below the wall before we knocked it. There were piles of it along the whole inside stretch of it – and it went on for a while after the wall came down too.” 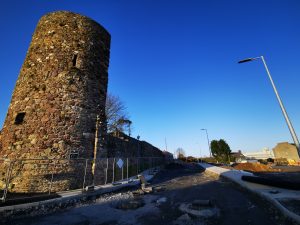 Brown’s Lane is being widened as part of the works due to facilitate the Michael Street Shopping Centre.