Cork teen: ‘Just because you’re in a chair, doesn’t mean your independence is gone’

A Cork-based organisation with a mission to empower children living with a physical disability has released a short documentary to mark International Day of People with a Disability. 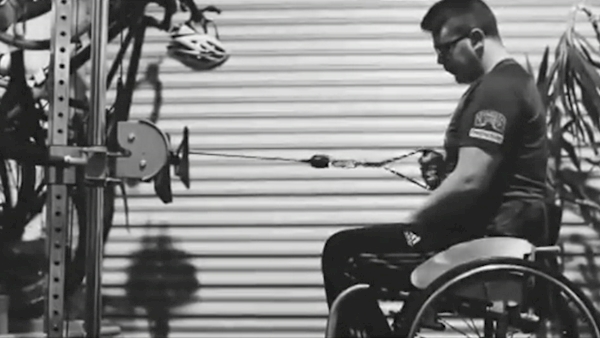 Rebel Wheelers provide children with a fun and safe environment in which they can participate in sport while promoting independence, healthy living and well-being.

The organisation offers a range of different sporting activities including basketball, rugby, athletics and other activities such as ice skating, hand cycling, boccia and drumming.

Just some of these sports are highlighted in a short documentary featuring five rebel teenagers who share their stories about how participating in basketball in particular has had a positive impact on their lives.

Cormac O’Brien, Dylan McCarthy, Seán Ryan, Jack Quinn and Darragh O’Regan prove that a physical disability need not be a barrier to sporting achievement as they mark International Day of People with a Disability.

The teenagers, who have various physical disabilities, spoke openly about the obstacles that they have overcome and the opportunities that have been presented to them through their involvement in sport.

Sean Ryan, who has cerebral palsy, said that he finds it difficult to keep up with his friends and sometimes misses out on the conversation because he cannot keep up with them.

“I can’t really move quick so I’m aware that I can’t keep up and I kind of lose bits of conversation.

“When you’re a few steps behind, you hear bits and you don’t hear other things and I think it’d be just be nice to hear a full conversation and understand more.”

He said that through his involvement in sport with Rebel Wheelers he has gained the ability to “solve problems in different ways”.

“There’s no point feeling sorry for yourself. You get a certain deck of cards really and you just keep going with what you have and that’s it,” he said.

Cormac, who has a brain injury that he suffered as a result of the Chickenpox when he was just two years old, said that people tend to treat him differently because of his disability.

He said that sport has made him mentally stronger and has taught him that he is “able to do stuff”.

He is determined not to let his injury define him and is hoping to get on the Ireland team and play basketball in college.

Leaving Cert student Dylan McCarthy has Ehlers-Danlos syndrome where he easily dislocates his joints and has no weight-bear due to a lack of collagen in his ligaments which keep the joints together.

He said that although people are “so nice” and want to help him, there are times where he would like to be able to do things for himself.

“At some points you just want to open a door for yourself, you still kind of want to get around for yourself.

Just because you’re in a chair, doesn’t mean your independence is gone.

He said that it took him some time to get used to relying on his wheelchair but his participation in basketball with Rebel Wheelers kept his mind free from it.

“It did take a while, I’m not going to lie. But being with the lads here and being with the basketball just kept my mind free from it and just kind of kept me going. If I didn’t have that I don’t think I’d be able to cope with it at all to be honest.

“I still live my life, I still play all my sport and I still do everything an able-bodied person would do but just in a different way and that’s how I live my life.”

Jack Quinn, who had both his legs amputated at just 10 months old after being born without the tibia bone in both of his legs, said that he used to ask the question “why me?” but became used to living with his disability as he got older.

“I saw there were things I could do that I never thought I could do,” he said.

“I started basketball straight away and I tried other sports as well but I just zoned in on basketball a couple of years ago.”

Jack represented Ireland at the European Wheelchair Basketball Championship in July and is hoping to go abroad and play professionally in the near future.

Darragh O’Regan, who at three days old underwent an operation to fuse his back, said that playing basketball has taught him that “hills are just a bit of an obstacle”.

Last September I did the Women’s Mini Marathon in Cork in half an hour and I was the first wheelchair over the line.

“I was delighted. I finished about five minutes before my dad actually.”

Following the release of the short documentary, produced by Peadar Ó Goill, secretary of the club, Orla O’Brien, told the Irish Examiner:

“We wanted to give the guys a challenge and asked them what they would like to do. So they wanted to make a video and tell their stories.

“Rebel Wheelers help children from the age of five and offer them a range of different sports and activities to take part in.

“At the age of 10, the children then move onto more structured training and can chose their preferred sports.”

For Darragh, Jack, Seán, Cormac and Dylan, playing basketball and making it to international level is their dream.

The five teenagers train with Ainle Ó Cairealláin, strength and conditioning trainer and owner of ACLAÍ, who helped them through the production process of the video.

“They train at the same intensity as any able-bodied player, and that’s a really important message,” said Ms O’Brien.

“They have the same homes and dreams as anyone else and they want to make it to international level.

“They have so much hope and they are so positive about their futures.”

Ms O’Brien also said that as of this morning middleweight champion Gary ‘Spike’ O’Sullivan is the club’s new ambassador, having seen the short documentary.

Rebel Wheelers work with over 70 families and is dependent on fundraising and grant applications. All funds go straight back into the club to run programmes, purchase equipment, cover hall hire and transport costs.