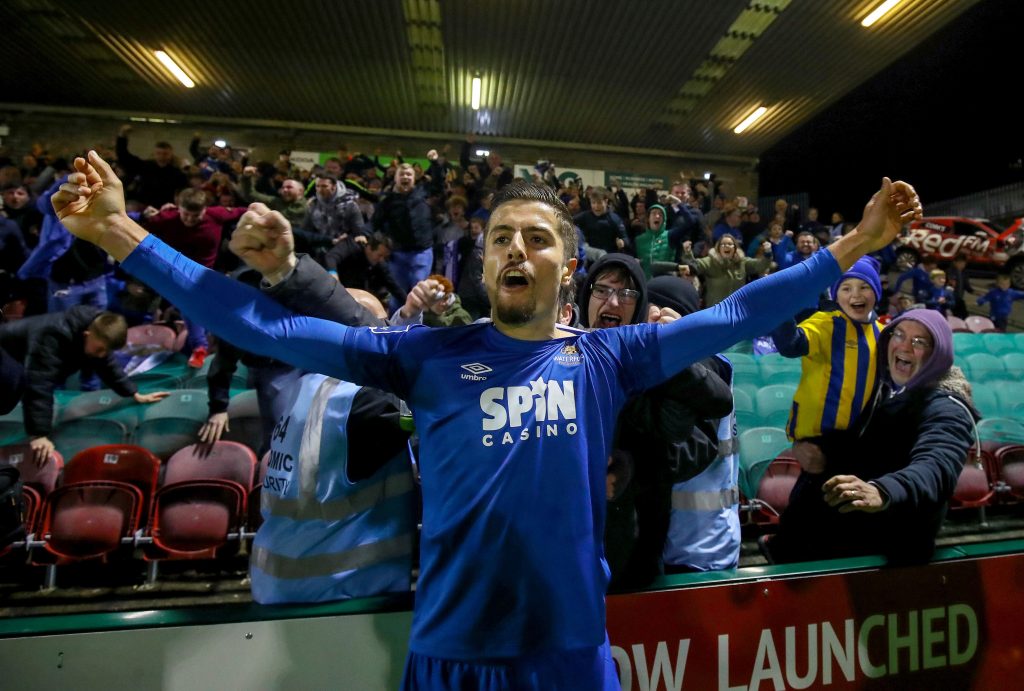 Zack Elbouzedi celebrates scoring a goal away to Cork City for the Blues during the 2019 season. The attacker has praised Alan Reynolds this week for taking a chance on him.                        Photo: Inpho.

Republic of Ireland Under 21 star Zack Elbouzedi, who played with Waterford FC last season, has paid tribute to Waterford FC manager Alan Reynolds for giving him the opportunity to rekindle his career after returning from Scotland at the start of last season.
Elbouzedi, who looks set to join another club for the 2020 season with both Dundalk and Shamrock Rovers favourites to secure the Dubliner’s signature, scored the winner in Ireland’s 1-0 win over Armenia before playing a starring role in the brilliant 4-1 win over Sweden.
There’s no doubting that the midfielder caught the eye of the Blues fans when he was at the RSC that saw him pick up the young player of the year award, but it was his praise for Alan Reynolds that he was keen to get across in “The Football Family” podcast with the42.ie this week.
After leaving West Brom Albion in 2017, he made the move to Scotland where he still had a year on his contract with Inverness Caledonian Thistle, but after suffering injury, the 21-year-old decided that a move back to Ireland was the way forward.

THANKFUL TO RENNIE
“I’m grateful to Alan Reynolds for trusting in me and giving me the chance again,” said Elbouzedi. “I still had a year left in Scotland, but I wasn’t playing, and I wanted to leave. I just didn’t want to waste another year in Scotland, so I wanted to come home.
“When I came home, I was in a tough place, but in fairness to Alan Reynolds, he was onto me straight away. He was keen to get me to Waterford and he convinced me that Waterford was the place that I always wanted to go to at that point.
“He told me I was going to play, and I’ve always known if I get the chance to play that I’ll repay the manager. It probably went a bit better than I expected but I knew once somebody gave me the chance that I’d repay them. I was delighted to get that chance from him.
“As I said I was in a tough place, but I have great support around me. My mam, my dad and my brother were always positive, and they were the ones who were sort of relaying the message that if you get the chance, we know that you’ll take it.
“But they stood by me and Alan Reynolds, as I said, was on to me straight away. He said he believed in me and that he’d give me the chance. He stuck to his word and I must thank him for that because it could easily have gone a different way. Thank God it went a good way.”

NEXT CHAPTER
After scoring six times for the Blues, Elbouzedi did suffer a shoulder injury whilst playing for the Republic of Ireland Under 21 that ruled him out of action for a while, but now he has shown for his country in recent games that his swagger is back and he hasn’t ruled out a move back across channel.
“I want to play at the highest level that I can whether that’s in England or Ireland. There’s definitely the desire and I know that I’m good enough to play over in England so if the opportunity came and it was the right opportunity, I’d take it, but I just want to keep playing football and enjoying myself.
“There’s no rush for me to jump into something that isn’t the right move. I need to speak with my family and make sure that the next step is the correct step.” The one thing for certain that Blues fans won’t be watching Elbouzedi terrorising defences whilst wearing a Waterford FC jersey next season like a lot of other players.