Opinion: Honour the dead by living in the now

NOVEMBER is the traditional month in which Catholics honour their dead. In Mexico, the first two days of the month (All Saints Day and All Souls Day) are marked by the ‘Día de Muertos’ (Day of the Dead) celebration, in which death is characterised as a part of life.

In Ireland, the faithful departed form part of the Eucharistic Prayer offered each Sunday, underlining the significance of, one could argue, the faith’s other trinity: life, death and the afterlife, three compartments of a singular entity.

Some can, to their own justification, be maudlin when it comes to the topic of death, choosing to beatify a loved one to the point where such a person becomes unrecognisable from their living, breathing being.

Atheists take the utterly clinical view that we are conceived, delivered, live, die and in death cease to be entirely. Christians profess that life on Earth is followed by a different form of existence in the hereafter. This is indeed the ultimate Mystery of Faith.

Yet that same sense of mystery also applies to those with absolutely no faith given that none of us can profess with any certainty about what, if anything, awaits beyond death.

Taking the time to remember those gone before us offers a salutary reminder that living our lives well is the best way of honouring their memory. Kindness goes a long way and it makes each day a great deal more tolerable.

The ‘Candlemas’ ceremony held at Portlaw’s Saint Patrick’s Church on Tuesday last proved a timely occasion in which to take stock and remember friends and neighbours who have died over the past year.

Addressing the congregation, Parish Priest Richard O’Halloran referenced Act One of Shakespeare’s ‘Hamlet’ “which deals with talk of the dead, it speaks of empty tombs and other phenomena associated with death and life”.

He continued: “But maybe that mixture of doubt and certainty which Shakespeare’s grapples with, that speaks loudly even today for many, many people because death makes us question, death makes us think and it makes us reach for a definitive answer to the question: the question of life after death…is there an ‘undiscovered country’.” Catholics believe in that undiscovered country, “in the relationship between those of us on Earth and those who have died – that relationship is never broken”.

Fr O’Halloran said that, for the living, that undiscovered country “remains very real, very important and very much treasured. We treasure that place because it’s where our loved ones are…and they continue to guide, comfort and inspire us all by their memory and their life”.

The clinical attitude towards mortality is hardly unequivocal proof of an overly cynical mind either. If anything, it ought to encourage anyone of such a disposition to make the most of the time we have. It ought to add impetus to one’s existence and ensure we don’t dwell on some ‘pseudonymed’ Twitter handle venting spleen in our direction.

Most us draw on and learn from the experiences of our own lives, particularly from the mistakes we’ve made along the way. Those of us lucky enough to be reared by loving parents and guardians take the best of their guidance and put it to practical use at home, with our friends and in the workplace. We all inevitably reach an age when the words of those no longer around to offer direct counsel tend to resonate in our mindsets with piercing clarity.

If you can tap into those words through the lighting of a church candle, if you re-encounter such words while walking a path well-worn by a loved one or while thumbing through a birthday card written long ago, embrace it. Treasure it. It keeps those you love nearby, be they dead or living. As the stoic Seneca put it: “All things that are still to come lie in uncertainty; live straightaway.” Truly words to live by. 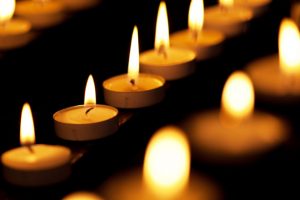 Taking time in the run-up to Christmas to honour our bereaved loved ones helps many of us to take stock.