Over 2,000 to take on Waterford AC Half Marathon 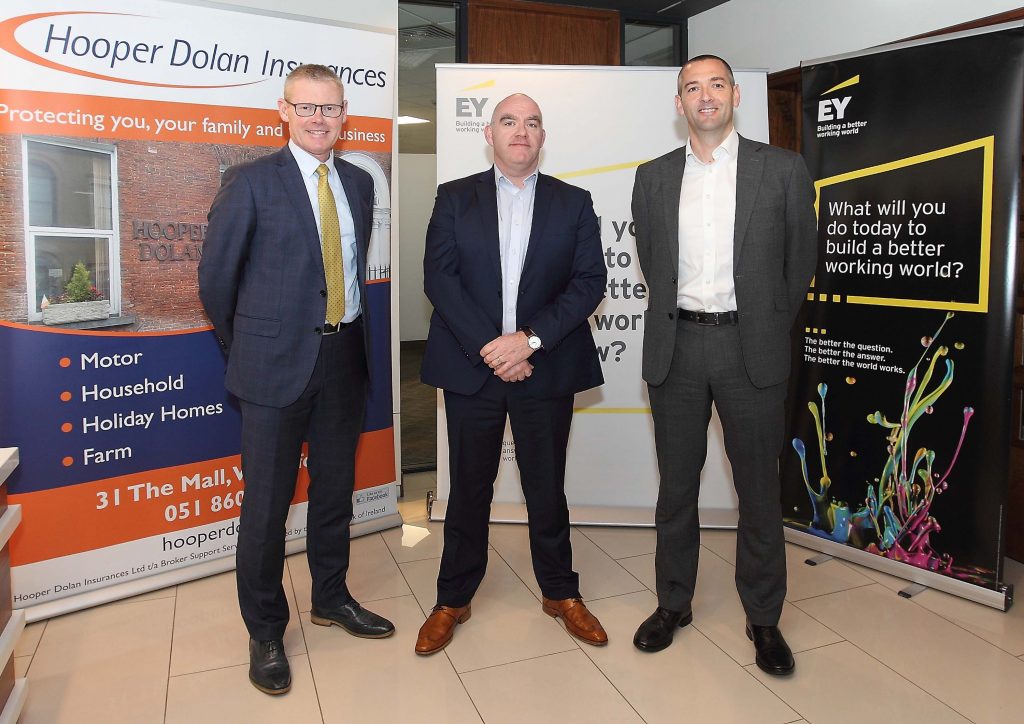 Pictured at the launch of this year’s Waterford AC Half Marathon which takes place on this coming Saturday at 9.30am at the WIT Arena were Cathal Lowe, CEO, Hooper Dolan Insurance and Ronan Clinton, Ernst &amp; Young – Ireland (EY) Assurance Partner who are the main sponsors and Trevor Walsh, Chairman, Waterford AC. Photo: Noel Browne.

With an entry well in excess of 2,000 the Annual Waterford AC Half Marathon is on Saturday next December 7th at 9.30am (please note change of time) at WIT Sports Campus Carriganore where it starts and finishes.
Due to roadworks at a point on the usual course there will be a new course on Saturday. The race will start as usual inside WIT up near the top of the hill and then will come out the back entrance of WIT turning left down Oliver’s Hill and left on to the Western Link road over in front of the main entrance to WIT and to the Bridge roundabout as usual and then back on the opposite footpath to turn left and in the old Kilmeaden road. The next six miles remain unchanged from previous years. The change comes at the Fire Station in Ballybeg where the race turns right out to the outer ring road to Six Cross Roads Roundabout turning right and over to Ballycashin Roundabout and then over to Butlerstown Roundabout turn left out towards Kilmeaden for 1.1 miles passed the Holy Cross turning right at first turn past The Holy Cross over to the Old Kilmeadan road turn right and back in this road through the Main WIT Entrance to the finish. Please note starting time is 9.30 am.

National Walking Championships
St Anne’s Park Raheny in Dublin is the venue again on Saturday for the National 20km and 30 km Road Championships for women and men. Kate Veale West Waterford is back in action after an injury and we wish her well in her efforts, the fixture which has lots of other grades juvenile up to master’s begins at 11 am.

National Awards
On Thursday last the Irish Life Health National Athletic Awards took place in The Crowne Plaza Hotel in Blanchardstown in Dublin and Sonia O’Sullivan arguably Ireland’s greatest ever athlete was inducted into the Hall Of Fame. Thomas Barr Ferrybank was one of those nominated for Athlete of the Year but the honour went to Ciara Mageean who finished third in the European Indoor Championships in the 1500 metres.
A Special Recognition award went to 1984 Olympian Patricia Walsh of Waterford AC who finished ninth overall in the Olympics in Los Angeles missing out on the final by just one place. She was the first female throwing athlete to represent Ireland at the Olympic Games. In 1984 she set a new Irish record of 57.60 metres in the discus which still stands to day. At the Irish Senior Championships outdoors between 1977 and 1985 she won the discus each year a total of nine titles and won two shot putt titles in 1979 and 1984 and one javelin title in 1977.
In addition Bríd Golden Ferrybank was presented with a European Athletics Women in Leadership Award in recognition of her great Coaching Achievements with International athletes. Bríd is a Level 3 Irish Coach and Level 4 IAAF Coach and was a top athlete herself as Bríd Hallissey winning the Outdoor Pentathlon on 11 times between 1986 to 1997 and 100 m hurdles in 1986.Congrats to both ladies from all involved in Waterford athletics.

Irish Wheelchair Award for Aislinn
At the National Wheelchair Association Awards last week Aislinn O’Regan West Waterford got two Awards and a Certificate. Her first Award was for being second overall in the discus in the Grand Prix Series. She was also presented with a special Merit Award and a Certificate for a setting a new Irish indoor record in the shot. Again congrats from all in Waterford Athletic circles.

Munster B Juvenile Championships
In Two Mile Borris Co Tipperary on Sunday last the Munster Intermediate and Juvenile B Cross Country Championships took place and there were two Waterford winners both from West Waterford AC. Pat Hennessy who has been running very well in recent weeks had a fine win in the Intermediate race with a number of seasoned campaigners behind him and Oisin O’Riordan was first home in the u 17 B race. For KCK their girls u 15 team finished second in the inter club section and Molly Byrne was 8th U-11.