Labour Councillor Seamus Ryan told the November Waterford Metropolitan District meeting that there had been  “a number of situations lately where residents have been blocked from accessing Spring Garden Alley” due to poor car parking practices at the Apple Market.

“I wonder could we bring forward some sort of proper traffic management plan for allowing access and egress from Spring Garden Alley for the residents,” said Cllr Ryan. The focus seems to be on the businesses in the area but it’s a shared space and I’d ask that that would be looked at.”

In reply, District Engineer Conor O’Neill said: “The entrance into Spring Garden Alley shouldn’t be blocked. That’s illegal parking so we can enforce that with our own Traffic Wardens as well as the Gardaí if we know that that’s happening. As you (Cllr Ryan) said, it’s a shared space and everyone has to live with it and access to their properties is paramount, even for emergency services and so forth. I don’t believe there is a traffic management plan required for that area because the access should remain free – it’s like any other road.”

Sticking with the Apple Market, Cllr Marc Ó Cathasaigh noted that paving on the approach into the area “is beginning to lift very badly under the weight of the traffic so that will probably need to be addressed post haste because it is only going one way.” In reply, Mr O’Neill said: “There’s a lot of issues with paving there… it’s still under the maintenance period so I’m hoping we’ll get that repaired.”

Meanwhile, at the same meeting, both Metropolitan Mayor Breda Brennan (SF) and Cllr Eddie Mulligan lamented the long-running inoperable street lights on the Cork Road between the Regional Sports Centre and The Yellow House.

Mayor Brennan commented: “It’s a joke now. This has gone on for months and months and it’s really, really dark along that section of the road; when you’re driving through there you nearly have to put on your full beams.”

Said Cllr Mulligan: “There doesn’t seem to be any explanation as to why we’ve waited so long for these lights to be repaired.”

In reply, Conor O’Neill said: “There’s probably an overload there and there’s probably a new connection needed – I don’t really know for certain but I will feed back to Barbara (Stosic – the Council’s Executive Engineer) on that.” 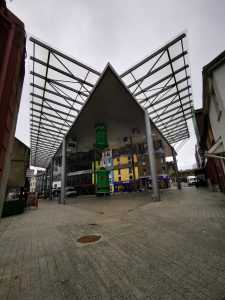 The Applemarket as viewed from Spring Garden Alley.