View from the Green Room: The Bockety World of Henry and Bucket 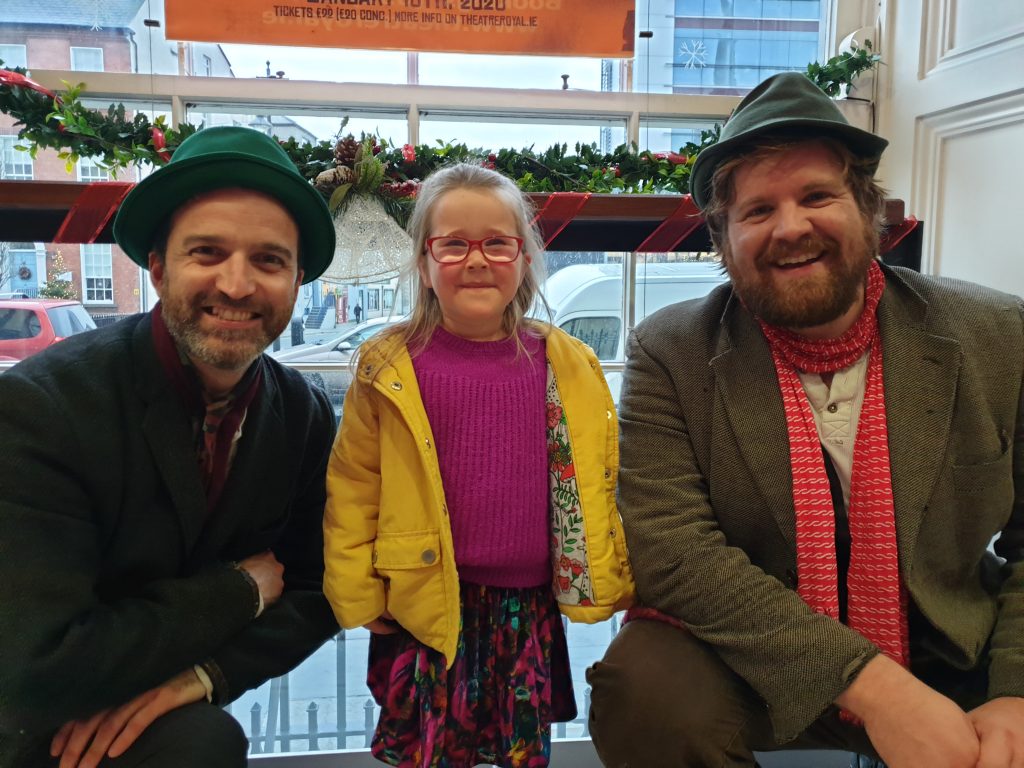 Actors John Currivan and Paul Curley with Saoirle Dennehy at ‘The Bockety World of Henry and Bucket’ at the Theatre Royal.

THERE’S nothing like a children’s play to bring you right back to a time when the world could be bockety crooked and still work deep within the imagination of a small child. So here I am on a Winterval Sunday matinee with my granddaughter Saoirle for a crazy play that engages its young audience from start to finish.

It’s a day in the life of Henry and Bucket who come and introduce themselves in their raggedy suits and boots to their young audience in the upstairs bar where there’s free hot chocolate and popcorn. Just so no one gets scared. And these kids are not short of commenting on the action.

It’s a normal day in this bockety world. The two boys wake up in a bed that becomes a car and takes them all over the universe. Complete with sound effects from lip flapping and nose-chanting and a row over what gets played on the radio. It’s a child’s world where every object is a source of infinite invention and the world is a gigantic playground.

But first, there are duties to attend to. A shower – fully clothed – under an umbrella, a hunt with metal detectors of tins of beans to be heated over a hot iron – plugged into a shoe, of course. Well… what else?

Kevin and Buckety collect raindrops in bockety buckets and then squabble over who owns what and who got the most rain. But not before they play with their pet mouse who lives in a rusty old cage – it’s a computer mouse btw – and then check the weather forecast on a pair of old rabbit ears that doubles as a couple of sat dishes atop a fishing pole.

A squabble leads Buckety to read a story atop a rusty old fridge with everything in it – bar food! On their journey to outer space, they meet and listen to small birds that perch and entertain them. But the bould Buckety doesn’t follow the rules that says you can’t be in the car on your own when they return and sits there until it’s time for the car to turn back into their bed again.

Snores restore the tranquillity and the boys make up and live happily ever after. Well until the next row anyway. Actors John Currivan and Paul Curley give the largely wordless text their all as they bring us across the universe and home to a child’s world of endless invention; proving that the space of the unspoken is always wider than the spoken. I marvelled at their endless invention, good humour and childlike wonder in the 50-minute journey. The musical score bridges the leaps in the script and the bric-a-brac of the set allows Henry and Buckett endless scope for invention on their plod about a child’s universe. Cork poet Seán Ó Riordáin’s poem of the magic of a child’s backyard world reverberated: “Tá Tír na n-Óg ar Cúl an Tí/ tír alainn trína chéile” (the Land of Eternal Youth is behind our house, a crazy world altogether) and I find myself back there in that world surrounded by delighted young children and their very young parents.

ON THE SPOT: Martine Rogers