Waterford stars help Munster to back to back titles 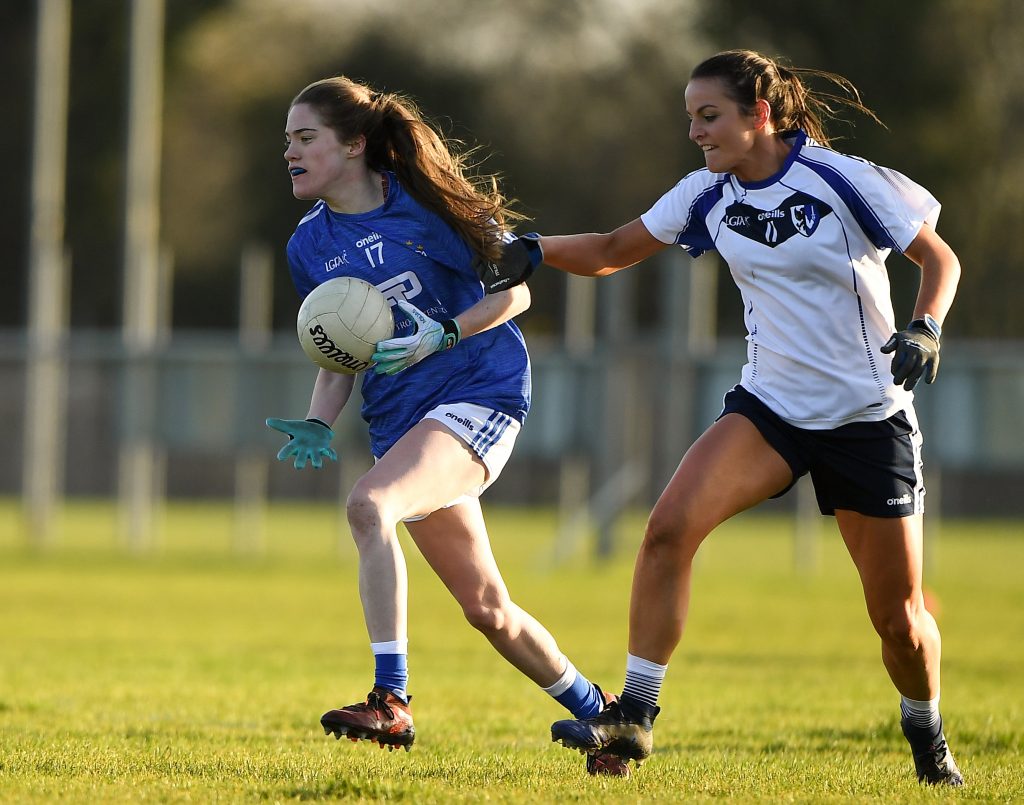 Waterford and Munster’s Katie Murray attempting to get away from Connacht’s Jenny Higgins in Kinnegad. Photos: Sportsfile.

Three first half goals paved the way for Munster to win back to back Interprovincial titles in Kinnegad on Saturday afternoon.
Connacht provided stiff opposition in the final but three opening half goals from Waterford duo Michelle Ryan and Aileen Wall, and Cork’s Saoirse Noonan, put the result out of reach of Con Moynihan’s side.
In an entertaining day of football, Munster had already put both Leinster and Connacht to the sword and they showed no signs of tiredness as Michelle Ryan hit 1-1 early on despite Laura O’Dowd’s opening score. Ryan’s goal was a beauty – a one-handed catch and a split second turn before burying the ball in the net.
Siobhan Tully and Libby Coppinger traded points and despite excellent saves from Connacht keeper Aisling Tarpey, Munster were not to be denied as Player of the Tournament Niamh O’Dea pointed and Aileen Wall added her side’s second goal a minute later. Saoirse Noonan found Munster’s third goal before Coppinger and Ryan added a point each either side of a Tracey Leonard free.
The second half was a much cagier affair with Munster going defensive; Kerry’s Aislinn Desmond and Waterford’s Emma Murray in particular impressing.
The teams traded scores for much of the second half before Katie Murray added the cherry on the cake and the fourth goal of the contest, sealing a memorable second title in a row for Pat Sullivan’s charges. Munster won on a 4-9 to 0-9 scoreline.
Unfortunately Leinster were to head home early as defeat to Munster in the opening round and a late comeback from Connacht in Round Two put them out of contention for a place in the final. Late goals from Roisin Leonard and Sarah Conneally booked Connacht’s place in the Final, a terrific comeback from the Westerners, who had been 1-10 to 1-3 adrift at half time.
Munster were managed to victory by former Waterford supremo Pat Sullivan and included the following 11 Waterford players. Megan Dunford (Abbeyside), Caoimhe McGrath, (Abbeyside), Karen McGrath, (Ballymacarbry), Emma Murray (Comeragh Rangers), Kate McGrath (Kilrossanty Brickeys), Michelle Ryan (Ballymacarbry), Rosie Landers (Ballyduff), Katie Murray (Comeragh Rangers), Aileen Wall (Ballymacarbry), Kellyann Hogan, (Ballymacarbry), Rebecca Casey, (Stradbally). The physio was Colin Walsh from Dungarvan.