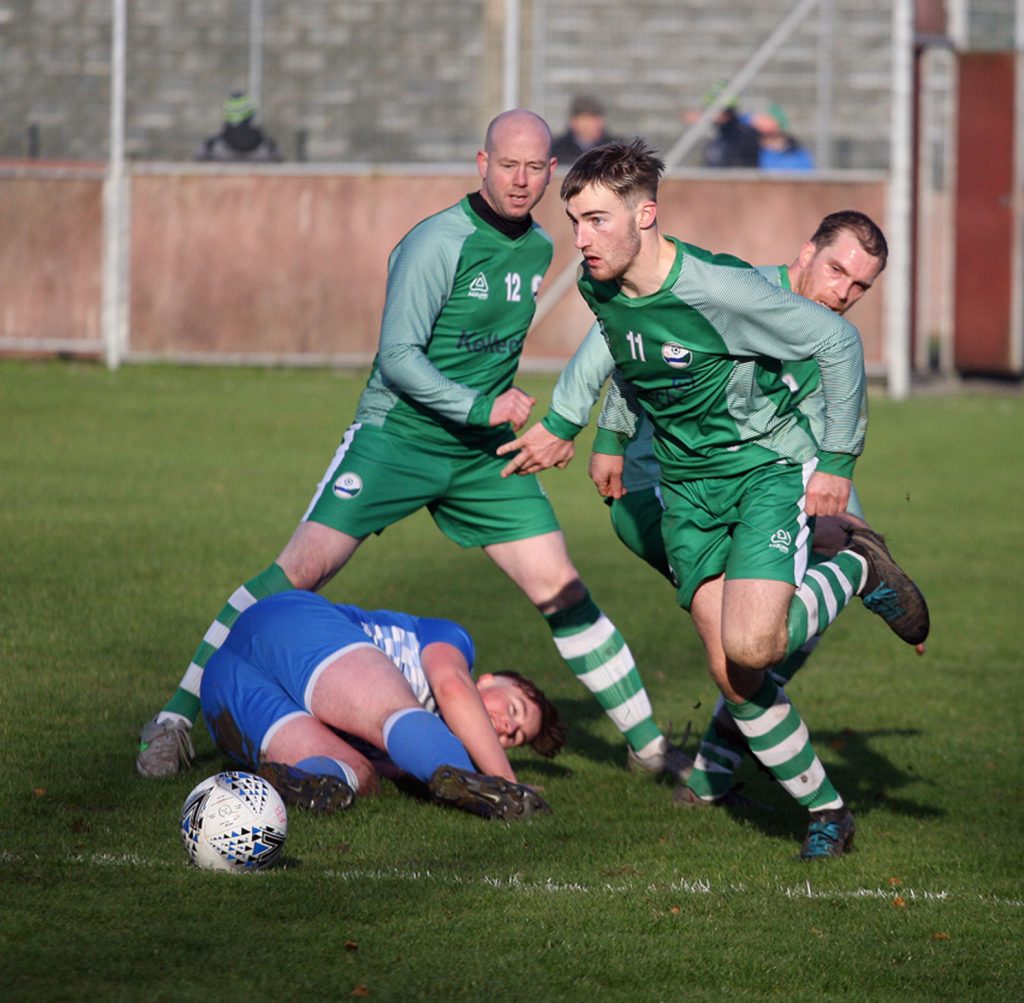 Ferrybank winger Ethan Phelan on the attack against Hibs in the Premier League at Mitchell Kennedy Park on Sunday. Photo: Paul Elliott.

Ferrybank came to Mitchell Kennedy Park on Sunday last to take on Premier League champions Hibernians and the men from across the Suir walked away with three vital points tucked away safely in their back pocket. At times in the game Ferrybank had chances to bury Hibs but they failed to put them away and that kept Hibs in the game. When David Cooley dragged Hibs back into the game late on Ferrybank looked a little bit nervous. However into the fray came Stephen Imiren and his goal secured the points for Richard Gaffney’s charges.

Boys In Green On The Attack
It was Hibs who had the first chance of the game in the first minute, Mark O’Keeffe picked up a Walter Croke cross but his shot on the spin flew just wide of the far post. On two minutes Ferrybank went close when Ethan Phelan whipped in a left wing cross that fell to Sean Duffy but he side footed wide of the far post.
On five minutes Ferrybank opened the scoring, Paul Phelan drove a corner kick into the box, the Hibs defence failed to clear and Kevin Hurley popped up at the far post to score from 10 yards. Ethan Flyyn got away down the left on 11 minutes, once again his cross found Sean Duffy and he sent up Meshac Babatu but the striker headed over the bar. At this stage the Hibs defence were under severe pressure and Ferrybank should have scored scored again on 19 minutes, Babatu forced Clive Prendergast into a mistake but Sean Duffy saw his close range effort saved by Hibs keeper Sean Whitty.
Minutes later Adrian Rockett knocked down a Paul Phelan cross into the path of Ethan Phelan but his goalbound effort was blocked on the line by David Cooley. On 38 minutes minutes Ferrybank went two up. Hibs keeper Sean Whitty saved a Sean Flynn header but from the resulting corner kick that Paul Phelan drove to the far post, this time Sean Flynn made no mistake with a powerful header that found the top corner of the net.

No Way Back For Hibs
The visitors continued to attack as the second half got under way and Hibs had to pull everybody back to try and contain the Ferrybank attack. On 50 minutes Sean Duffy played a glorious pass into Paul Phelan who controlled the ball before firing in a powerful volley that forced the save of the game from Sean Whitty. Minutes later Ethan Phelan picked up a Meshac Babatu pass but his left foot strike was pushed out for a corner kick by Hibs keeper Whitty. Ferrybank at this stage had passed up some really good chances and should have had the game wrapped up, but Hibs showed their fighting spirit and pulled a goal back on 63 minutes, Jason Keane fired a cross into the bo, however the Ferrybank failed to clear and Walter Croke set up David Cooley and he drove a low left foot shot into the far corner. Hibs were now back in the game and they had two good chances to draw level as Ferrybank wobbled a little bit.
On 68 minutes Michael Carroll crossed to the near post but Mark O’Keeffe saw his flick header sail into the grateful arms of Brandon O’Callaghan. Minutes later Jason Keane got behind the Ferrybank defence and played in a low cross but Walter Croke shot high and wide. Ferrybank regained their composure and substitute Stephen Imiren wrapped up the points with a superb goal on 73 minutes. After breaking up a Hibs attack Thomas Whitty played the ball wide to Imiren, the winger skipped pass two tackles as his run took him into the Hibs box and then from a tight angle he found the far corner of the net with a top class finish. Thomas Whitty had a late chance for Ferrybank when he raced onto a long ball from Adrian Rockett but Hibs keeper Johnny Arrigan was quick off his line to make a smart save.