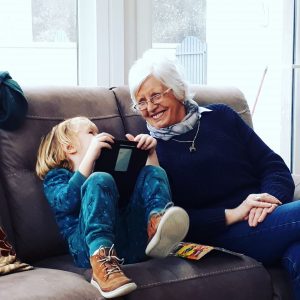 NOELINE Power is immaculately dressed in a warm shade of mustard, with a wide smile offered, not just to me, but to everyone who walks through the doors of O Shea’s Hotel on the morning we meet. I am told by many that Noeline always has a word and a smile for everyone.

Growing up on the Slievekeale Road in Waterford City in a family of 10, Noeline is the daughter of the late Watty and Biddy Walsh. “My father never drank or smoked, he was a league of Ireland soccer referee. He was always great in the evenings when we came in from school, he had us doing our spellings.”

Noeline grew up “against the Presentation Convent”, before the new school was built. “Our play area was the pole up in Slievekeale. The nuns came then and the wall was knocked and they walked around every night, so that was our swinging on the pole finished.” At least twenty children would have grown up in the same area, meaning many doors were knocked on each evening to play. “Margaret O’Donoghue and Eileen and Stella Dalton, two of whom are deceased now… we played Lucks, as we called them. I don’t know would you have heard of them, they were made in the Foundry. Before the Holy Family Church was built, that was our play area as well, we used to call it the Big Backs. Norris’ owned the land and he sold some of the land to the Holy Family Church. We moved to Luke Wadding Street then, two doors away from the church. We fasted from the night before Mass as children. We used to walk down Old Ballybricken having fasted from 12 O’ Clock the night before if you wanted to go to communion.” That was made all the more difficult when Mrs Galvin made toffee apples, which were about a penny each.

Noeline calls these experiences very simple yet, the effect they had on her is clear as her face lights up with the recollections.

“My father grew cabbages and potatoes, there was no such thing as selling them in those days. My Mum and Mrs O’Donoghue next door were always on the doorstep with one another. The neighbours back then were really what you would call neighbours, very close neighbours. My father was called on a lot by them to do different jobs and things for them.”

Religion remains a large part of Noeline’s life, and she goes to Mass daily in Tramore, where she now lives with her husband, Senan. Working in Swift’s Factory in Waterford, Noeline met her husband and subsequently married in 1966, “the day England won the World Cup.” Moving out to Tramore from Waterford might not seem like a big jump now but at the time, “my father said Oh, you’re the only moving away. I was only seven miles out the road.”

Noeline is very happily married and is now an exceptionally proud mother to her four children, Sandra, Miriam, Brian and Michael. I asked her if they were a close family; without missing a beat she laughed, “we are like Heuston Station, it’s always so busy.” Noeline is also a tremendously proud grandmother, telling me in no uncertain terms that “they keep us alive. My mother used to say they are yours from the womb to the tomb.”

Jack, Noeline’s grandson, asks, “Am I going to your house? Can I have something nice… now I don’t mean lunch yet.”

“We used to go to the club on the Yellow Road and women, when they got married, they didn’t go out, they didn’t really have a life. Nobody worked at the time and now women are more independent, events like local fundraisers are social gatherings.”

Noeline is Federation President of the ICA and the formation of a committee locally also saw her step into her current role in Tramore Hospice Support Group. Although this means she is always busy on trips and planning events, she confides that she could not do any of it without the support and the backing of her husband, Senan.

Noeline is keen for me to deflect some of the praise regarding her achievements and to mention the support of the committee who work tirelessly with her to deliver monthly coffee mornings and year-round fundraisers. This speaks volumes about the values passed down from her parents to her and now, it seems, down to her children and grandchildren. “At Christmas we will all be together at my daughter’s. I love having them but it’s not fair bringing the grandchildren to my house at Christmas. In the New Year, we will go on holidays with my grandchildren, like we do every year. I just love it. My granddaughter Rachael is like another daughter to me, I know if I look at my phone I’ll have about four texts from her.”

Family connection is of tremendous importance to Noeline, and as we speak, this is abundantly clear. The values which were instilled as a child have been passed on and although the landscape of Waterford is changing, she has allowed those values to shape her into an ever constant reminder of the importance of human contact in an ever changing world.