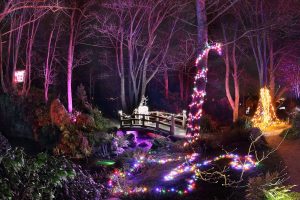 FOR the past few years, Winterval has lit up Waterford, raising spirits and encouraging local spending. That festive cheer was also present in Tramore, albeit in a more subdued sense – that is until this year. A collaborative effort from Tramore Tidy Towns, Waterford Chamber of Commerce and the team at Lafcadio Hearn Gardens saw Tramore glitter last week in a way it never has before.

The inaugural Tramore Christmas Festival saw crowds pour onto Main Street as Santa, the Fairy Snow Queen and Cllr Jim Griffin walked in the Christmas parade from the Fairy House at the top of Main Street. Snow was literally falling, with thanks to the snow machine and Tramore had the distinctive air of any European Christmas market, the aroma of mulled wine and sugar in the air. 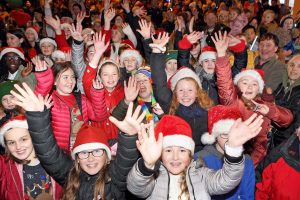 The huge crowds on Main Street for the inaugural Christmas Festival

Each Friday until Christmas, the parade will take place and the pop-up markets and food stalls will keep bringing the crowds to this open air, free event.

A little further down the hill, in the magical Lafcadio Hearn Gardens, the walkways and bridges have been replaced by a winter wonderland of lights and animals. At the launch on Friday, the Island of Ireland Peace Choir filled the gardens with the haunting tones of O Holy Night and, at times, not a word could be heard from the spell-bound onlookers.

Deputy Mayor of Waterford City and County, Cllr Seamus Ryan was on site to open the event. He praised the beauty of the event and the efforts of the team led by Janet Carey and Agnes Aylward. Over a period of a couple of evenings, all the lights were strung and for the fourth year running, the gardens were lit up, a pocket of peace at a time which is often wonderfully chaotic.

Jean Weller and Michelle Lonergan sampling some of the wonderful treats in store in SuperValu last weekend.

Wrapping up the weekend was Quish’s SuperValu, Tramore who hosted a food festival in-house. This Christmas, Tramore is a destination town for the festive season which has never happened before. It is through the vision of groups like Tramore Tidy Towns who transformed the Somerville picnic area in Tramore for Christmas that has raised the profile of Tramore this year. The train is now made into a feature across from Applegreen, meaning that the Christmas lights start at the entrance to the town and they light the way all the way up to the top of the town.

As it has in previous years, the Christmas tree is lit beside Splashworld, transforming the areas in Tramore which are traditionally the darkest.

The Christmas Festival on Main St takes place every Friday from 5pm and is free for all, as are the lights on the entrance to Tramore. A modest entry fee of €3 per child applies to the Enchanted Garden event in Lafcadio Hearn Gardens but for that price, there are unicorns, deer, music, storytelling and an assortment of winding pathways lit by the spectacular glittering lights.