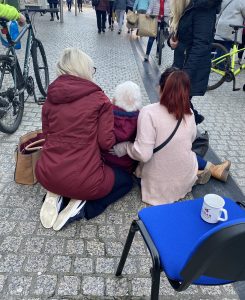 The elderly woman who fell on George’s Street on Monday, being cared for by three kind ladies who were passing by at the time.

ON Monday afternoon, an 88-year-old woman, who slipped on the cobbles of George’s Street, was forced to wait on the cold ground for 75 minutes until an ambulance finally got to her. The lady, who cut her head and damaged her right shoulder, was tended to by three good Samaritans who covered her with blankets, as well as their own jackets and hats.

An ambulance was called at 2:20pm and didn’t get to her until 3:35pm. Passers-by, including a man called George Ryan, told the Waterford News & Star that they couldn’t believe that she was still on the ground.

“I passed by at 2:30pm and asked if there was anything I could do for the woman, but there were some lovely girls holding her up and looking after her,” George said. “I passed by again at 3:30pm and I couldn’t believe that they were all still there. I think that it’s just disgraceful that on a Monday afternoon in Waterford City, an old woman has to wait over an hour for an ambulance. What would happen if she lived out in the country… God only knows how long she would have been waiting.”

This latest shocking case comes in a week where we reveal the delays that ambulances are facing when they bring patients to the Emergency Department of UHW –  almost three quarters (74%) are being held up for more than half an hour.  The Waterford News & Star understands that in this case, the ambulance handing over the elderly lady, was held up at UHW for 55 minutes.