LOCAL authorities in Waterford, Kilkenny and Wexford may have to plug a €5.5 million funding gap to ensure the full financing of the 22-kilometre Kilkenny (Waterford to New Ross) Greenway.

Replying to a query from Fine Gael Councillor Fidelis Doherty, Mr McKeown said: “The estimated construction costs of the greenway, which we said from the outset, are in the order of €13.5 million. We have €8 million in grant aid under the National Greenway Fund from the Department of Transport so the balance of €5.5 million will have to be funded by the three local authorities – that’s as it stands at the moment.”

The devegetation of the former Waterford to New Ross railway line, on which the new greenway will be routed, commenced in recent weeks, said Mr McKeown.

“The works started at the Abbey Road and worked back as far as Aylwardstown (Glenmore) and likewise started in New Ross and worked up as far as Glenmore so those sections are done to date. The works are taking in a half a metre each side of the actual line. In some instances, I know the residents in Abbeylands and in Ferrybank in particular were concerned about what was going on there but I think they’re happy enough now in terms of the level of clearance that has been done to date.”

He added: “The devegetation work that’s being done at the moment is purely to accommodate the site investigations, which also commenced this week, so that’s to look at the embankments and the various structures to see what order they’re in when it comes to accommodating the greenway.”

The detailed design for the new cycle route, which will ultimately link New Ross to Dungarvan via the new Sustainable Transport Bridge in Waterford city, remains a work in progress but is expected to be finalised before Christmas.

It’s understood that the Department of Transport is keen to examine the drawings as part of a review and approval process that’s expected to take a further two months to complete.

Potential locations for car parks servicing the greenway are currently being discussed by the local authorities as part of the overall project which is being led by Wexford County Council.

An abandonment order for the line, which will have to be secured in order for the development to progress, has been sought from CIE, Mr McKeown added. “All we’ve got so far from the CIE was an acknowledgment letter back on September… but Wexford County Council has sought a meeting with CIE before Christmas just to get an update on where that’s at.”

Last July, CIE told the local authorities that the abandonment process “normally takes six months” which means such an order may not be formally enacted (at the earliest) until the end of next January. However, a four-week public consultation phase, which has yet to be announced, is also required as part of any such process. 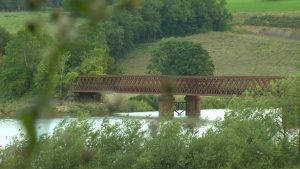 An estimated €13.5 million will be spent in the construction of the Waterford to New Ross Greenway.