Eight men deported after ‘hiding’ on ship berthed at Belview

EIGHT men who hid on a bulk cargo ship that berthed at the Port of Waterford on Wednesday evening last were deported under escort from the State 24 hours later.

The men, believed to be Albanian, returned to France on an 8.30pm Rosslare to Cherbourg sailing last Thursday following an assessment of their migration status by Garda Immigration Officers attached to Waterford Garda Station.

The officers were assisted in their work by the Garda National Immigration Bureau, with Gardaí stating that the men had been refused “leave to land” in Ireland.

Gardaí launched their initial investigation on Wednesday last after the stowaways were discovered by the crew of the Flex Emden, which had travelled from the French port of St Nazaire.

They men were confirmed to be in good health, but apparently some were left cold and hungry as a result of the journey.

According to the Irish Times, three of the men had fled the ship but were apprehended by Gardaí shortly afterwards. All eight were arrested and brought to Waterford Garda Station for questioning.

A Garda spokesperson confirmed that the individuals were not asylum seekers and had been previously registered as migrants on European databases.

Following a medical examination, the men were interviewed with the assistance of an interpreter to ascertain their exact movements prior to boarding the Belview-bound ship.

In our previous edition (December 2), we reported that as part of ongoing operations, containers had been x-rayed at Belview as part of operations conducted by the Gardaí in partnership with Revenue and Customs.

At a Joint Policing Committee (JPC) meeting held in Dungarvan on November 25, the Assistant Garda Commissioner for the South East, Michael Finn, said that authorities were already advancing plans for additional detection methods at Belview.

At the same meeting, Chief Superintendent Padraig Dunne outlined that a number of operations had been run at the Port, most recently on Friday, November 22.

Deputy Mary Butler (FF), who raised the issue at the JPC, said that last Wednesday’s discovery highlighted the need for improved measures to tackle people smuggling.

“Even though the men were in good health, the reality of the situation is that we have seen a number of high-profile deaths in England this year, as people place themselves at risk by travelling in the back of container ships,” she said.

“While I appreciate that larger Ports like Rosslare and Dublin command the bulk of resources, I believe Wednesday’s discovery highlights the need for measures to be extended to smaller ports like Waterford.”

Deputy Butler continued: “The Port of Waterford is a huge strategic asset in the South East and is a substantial driver of the local economy. The majority of trade is with mainland Europe and with Brexit still on the horizon, I believe that it’s more essential than ever to ensure that measures are in place to protect against people smuggling and trafficking. People who arrive in Ireland in this way have taken their lives in their hands, and while we need to see proper tracking and monitoring procedures in place to prevent smuggling in the first instance, there is also a humanitarian element to this issue. We need to ensure there is extra HSE personnel, with translation supports, as well as the Garda and security response, to deal with such incidents. There is now a focus on the larger ports, but smaller ports also need to be included.”

When contacted by this newspaper on Thursday evening last, the Port of Waterford declined to comment on the matter. 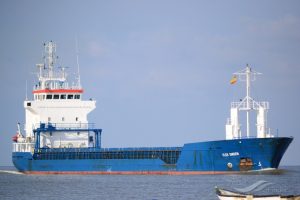 The Flex Emden berthed at the Port of Waterford on Wednesday last, December 4; the ship docked at Belview with eight men hiding on board.