THE Port of Waterford must consider long-term site development in order to achieve manageable and sustainable growth – so reads a key paragraph in its 104-page Masterplan (2019-2044).

The Land Use Strategy section of the Masterplan reads: “There is a concern around the treatment of port development land as a long term passive investment, which has in the past led to effective sterilisation of lands that should have been actively employed in port related uses. The Port Company needs to preserve its compulsory purchase powers in order to avoid such effective sterilisation on key sites.”

The report states that any positive exploitation of the “rail potential within the Port will mitigate these (projected) road traffic figures. Furthermore if this growth in traffic is a result of greater use of Port of Waterford at the expense of Dublin Port for traffic destined for or from the region then this would/could represent a net decrease in overall road traffic.”

The Masterplan adds: “The expectation is that the N29 should be capable of handling the low and medium growth scenarios. However, the high growth scenario could create a requirement for capacity enhancement (including a dual carriageway, which is referenced elsewhere in the plan). This is particularly the case as other developments occur on the IDA site on the Rathculiheen side of the port zone.”

It added that some measures were currently required, and would become necessary in the shorter term including the proposed roundabout at the Rathculiheen turn-off, which is needed now. The reduced speed section at the lower end of the N29 also needs to be extended.

Interestingly, the Masterplan also references two projects which are currently in progress. The first is the intent to relocate the Port pontoon, currently at Frank Cassin Wharf, to Belview, downstream from the Belview Quay.

“This would facilitate the berthing of the tugs at Belview with a number of immediate benefits including faster reaction, lower fuel cost and potentially far fewer openings of the proposed new ‘sustainable bridge’ linking the North and South Quays.

Secondly, the security and weighbridge offices are being renewed and expanded “to bring these buildings up to modern standards”. Meanwhile, a new gatehouse and security building has been designed for the second or bulk terminal entrance to the Belview Quays. 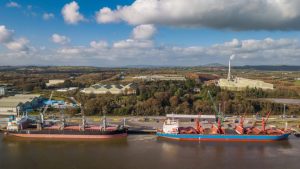 The Port of Waterford is currently recording 80,000 annual articulated truck movements in and out of Belview.