THE long-awaited runway extension at Waterford Airport is a viable proposition which remains firmly on course for delivery, according to Transport Minister Shane Ross.

Speaking in the wake of a meeting with Airport Board members at Killowen, following an earlier trip to the Port of Waterford, Minister Ross sounded an upbeat note about the future of both facilities.

“This project is a John Halligan project,” he declared. “He put it into the Programme (for Government) – but it wouldn’t have gone ahead if he hadn’t persuaded individual cabinet ministers one by one that it stands on its own merits as well and that’s John’s great achievement here. This is a project which actually makes commercial sense and he’s persuaded the cabinet to do this.”

Regarding ‘parish pump’ criticisms of the airport project, which Minister Halligan specified in his initial government forming negotiations, the Waterford TD replied: “Part of the Programme for Government was that, no matter what and I’m very grateful to Shane Ross for this, that Waterford Airport would not be allowed to close and you can see the funding that the airport has received – €380,000 over the last number of months – we have continually funded the airport even though we have no flights here because we see the value of it to the South East and the further development of the region under the (Project Ireland) 2040 plan.”

He continued: “I’ve met so many people in Waterford, former politicians who gave guarantees 20, 30 years ago that they’d extend the runway and didn’t do it. It took the Independent Alliance, negotiating with the Taoiseach, through Shane Ross as Minister, to get that €5 million. You will see work on that runway beginning next year when we have better weather, you will see the planning going in in the next couple of months and you will see flights here very shortly.”

Visit to Port of Waterford

Reflecting on his visit to Belview, Minister Ross said: “We got a very short tour (of the Port) and we were delighted with what we saw there. The fact that the Port is actually paying the Government a dividend now is something which is very encouraging for us. We had a satisfactory outline of their plans for the future which all looks positive. It’s a port which, obviously when Brexit happens, may even benefit from it and the fact that they’ve got direct routes to Rotterdam and elsewhere means that they won’t be dependent on the British market or British routes or the (British) landbridge so things are looking good in both places (the port and airport).”

As for the Brexit certainty provided by last week’s UK General Election, Minister Ross stated: “The Port wasn’t really that affected (by Brexit) anyway, they’ve no direct routes to Britain so it wasn’t something which particularly worried them. I think they’re looking for opportunities arising out of Brexit in fact.”

Regarding the redevelopment of Walsh Park, the works for which received planning permission 10 months ago but has yet to receive State funding, Minister Ross stated: “We didn’t discuss that today.” 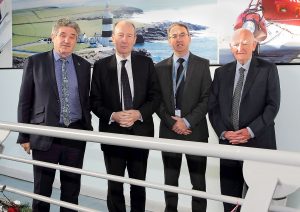