A Christmas tradition born in the Ursuline 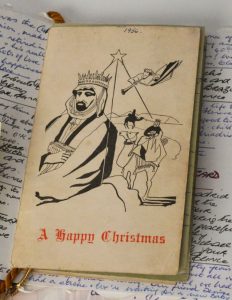 The Christmas card has been travelling since 1956.

A WATERFORD friendship hit national headlines this week for an unusual Yuletide correspondence between two women. Eunice Baily and Clare Brazil were both boarders in the Ursuline Convent school in 1956. It was then that Eunice first gave a Christmas card to her friend Clare.

Over 63 years, the pair have remained in contact and the exchange of a yearly Christmas card has happened every single year. One thing gives this story a little twist, however, each year the same Christmas card is exchanged. It now has three additional sheets of paper inside the card, bound by thread, making what was originally a Christmas card, now into a Christmas booklet of sorts.

Over the years, what has unfolded has been short snippets of insight into the life of each woman. With only a few lines written by both women each year, the card offers highlights of the various moments of importance in the lives of each woman.

In 1961, five years on from the inaugural Christmas card, Eunice writes: “Don’t dream of losing this at this stage! I’m hoping it will be in circulation when we’re grandmothers – but we’ve to get husbands first!”

In 1996, Eunice’s mother sadly passed away. The card that year reads, “To dear Clare. It is the only card I’ve sent on this card’s 40th anniversary, as my mother died this sad year. Love Eunice.” 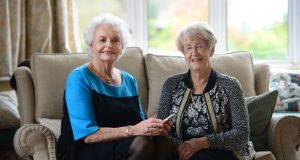 Correspondence like this is rare and serves as a time capsule of a changing Ireland and the progression of two separate lives, intertwined through the art of correspondence writing. The original card came from the Pioneer Total Abstinence Association and the black and white design featuring the three wise men speaks of an era before cards were adorned with glitter.

One Christmas card has seen hopes, dreams, loves and losses and this year, it leaves the Déise to travel to Dublin, a Christmas message carrying much more than words.