A MAN with an address in Mullinavat, South Kilkenny, was requested to make a €1,000 donation to the Waterford court poor box having entered a guilty plea to Waterford District Court for falsifying a loan application.

Judge Kevin Staunton made the request before telling the man (who is in his early 30s) that he had adjourned the matter for a further 12 months.

Garda Sergeant Michael Hickey (for the State) told the court that an investigation had been initialised on May 12, 2017 after it emerged that a loan application to a financial institution had been doctored by the accused. Gardaí in Thomastown led the investigation before it was transferred to Waterford Garda Station.

Sgt Hickey said the man had no previous convictions and had nothing else pending before the court. He had previously appeared before the District Court in relation to this matter last June when he entered a guilty plea.

Defending Solicitor Kenneth Cunningham said his client had been “very naïve”, telling the court that the application had stemmed from a fire at a property adjacent to the house in Waterford city that he and his wife lived in at the time. His spouse had suffered from inflammation of the lungs as a result of the fire at the nearby building which was owned by a “local charitable organisation”.

The man’s wife had suffered consistent poor health since the fire and had been treated by a consultant rheumatologist, a gastroenterologist while also attending the Dermatology Department at University Hospital Waterford, said Mr Cunningham.

When an attempt to seek restitution for the repair of his fire damaged home through legal means proved unsuccessful, Mr Cunningham said his client then “sought to resolve the damage by his own means”. This led to his submitting a loan application on which he had stated earnings which could not be verified. The court was told that he had learned “to alter a bank statement via Google”. When the application was later rejected, “it was felt that there was something wrong with it”, with an initial suggestion made that the details of his current account had been presented in “a more helpful” condition than it was in reality. This led to the investigation by Thomastown and, later, Waterford Gardaí.

Mr Cunningham’s client had previously apologised for his actions, which had led to no gain on his behalf or any loss for the bank in question. His was “a crime of great desperation and naivety”. At present, he was in full-time study (for a Masters in Teaching and Education) and wished to put the matter behind him.

Judge Staunton said the man had “found himself in a very unpleasant situation”. He believed the accused “was not a trouble maker and was not a criminal”.

While the matter brought before him remained a serious one, the only person “at a loss” was the accused. With Mr Cunningham confident that his client was “a man of good stead”, Judge Staunton requested the accused make a €1000 donation to the court poor box. In putting the matter back for a year, Judge Staunton told the man: “Good luck to you.” 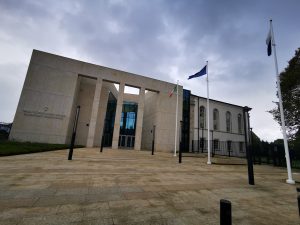